'I've always wanted to be mom shamed!!!!' the 'I Feel Pretty' star, who welcomed Gene Attell on May 5, jokingly responds to some hate comments about her decision to get back to work.

AceShowbiz - It seems like the mom-shaming days have begun for Amy Schumer. The new mom has received several hate comments on her Instagram account after she revealed that she had returned to work just two weeks after giving birth to her first child Gene Attell.

The comedian, who welcomed Gene on May 5, previously took to the photo-sharing platform to share a photo of her performing a stand-up set on Sunday night, May 19. While most comments are supportive, some others are slamming the "I Feel Pretty" star for her decision to return to work just weeks after giving birth.

"Already???? That's insane!!!! And inhumane," one user wrote in the comment section. "Contract or not you need to be allowed at least 6 weeks for maternity."

Another comment read, "I'm sorry. What?! Didn't you birth a human like 5 minutes ago?" Meanwhile, another user left a shocked-face emoji and added, "Take some time."

Amy had responded to the mom-shaming comments, though she didn't address any of the naysayers directly. She replied to a comment from Jimmy Kimmel's wife, writer and producer Molly McNearney, who wrote, "And … here comes the mom shaming … ughhhhhhhhhhh." Amy jokingly responded, "I've always wanted to be mom shamed!!!!"

Jessica Yellin, meanwhile, wrote, "I can only imagine what a pump room looks like at a comedy club. Welcome back," to which the "Trainwreck" actress responded, "every room is a pump room if you put your mind to it."

One of her fans also commented, "You can't keep a good woman down!" Amy totally agreed with the statement as she replied, "Oh no, you can't." 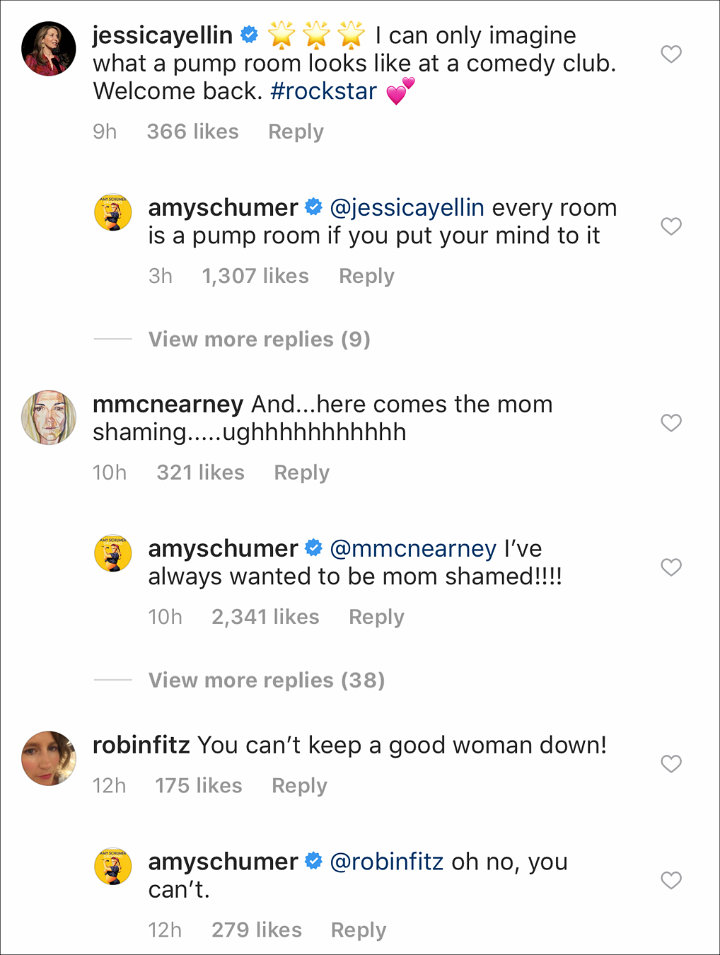 Amy's baby boy Gene her first child whom she shares with husband Chris Fisher, whom she married on February 13, 2018. The star has been keeping her followers updated about how she's coping with first-time motherhood on her social media pages, and hit headlines over the weekend when she shared a picture of herself using a breast pump beneath a tube top and calling it her "outfit of the day."