Family of the 74-year-old 'Star Wars' star has confirmed his death, prompting co-star Mark Hamill to call him 'the gentlest of giants' in his tribute, and San Diego Comic-Con bosses to offer condolences.

AceShowbiz - Peter Mayhew, the gentle giant who played the original Chewbacca in the "Star Wars" franchise, has died.

The British actor passed away on Tuesday, April 30, at his home in Texas, according to a family statement posted on Twitter. He was 74.

"The family of Peter Mayhew, with deep love and sadness, regrets to share the news that Peter has passed away," the statement reads. "He left us the evening of April 30, 2019 with his family by his side in his North Texas home." 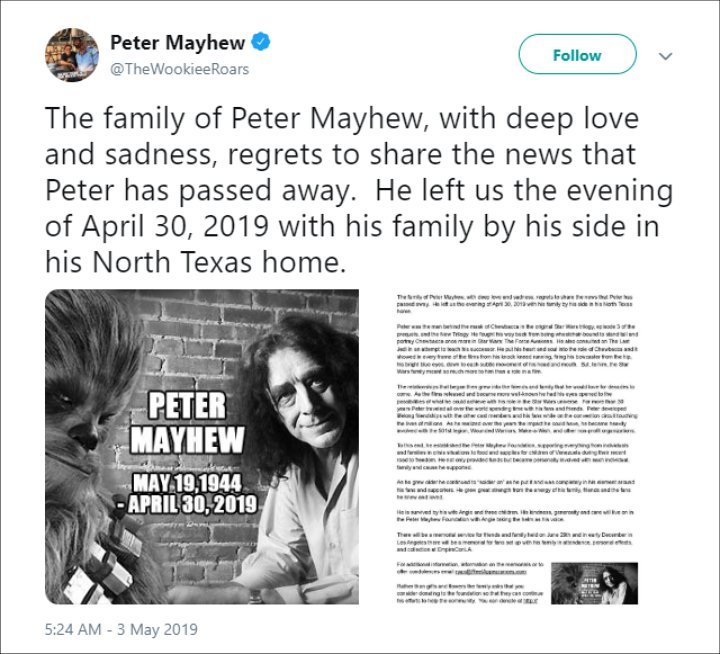 Paying tribute to his iconic role, the family statement continues, "He put his heart and soul into the role of Chewbacca and it showed in every frame of the films, from his knock kneed running, firing his bowcaster from the hip, his bright blue eyes, down to each subtle movement of his head and mouth." 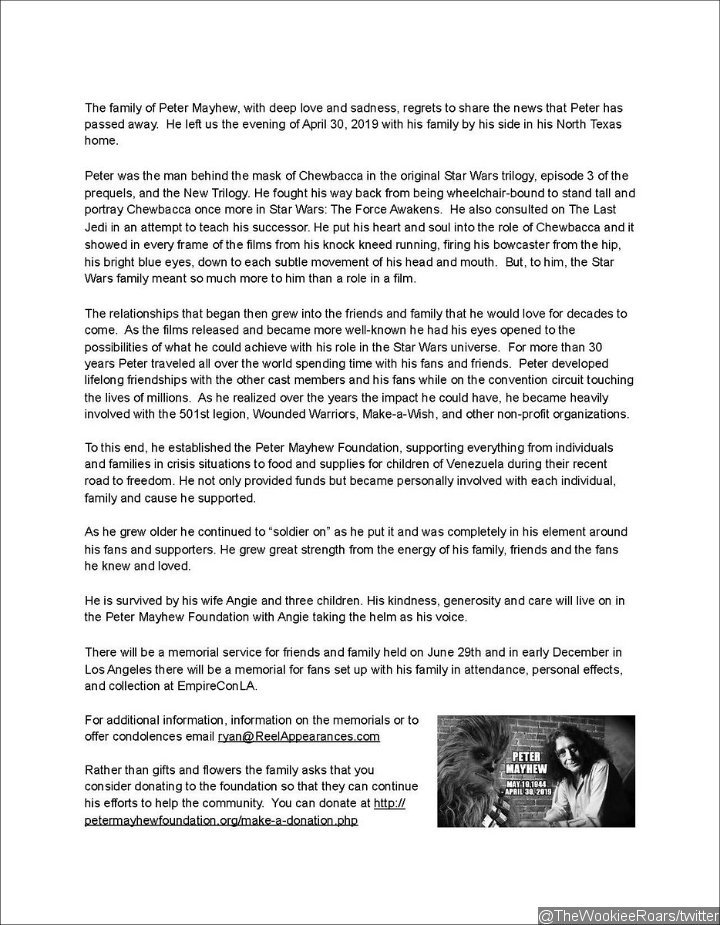 The full statement released by the 'Star Wars' actor's family on his passing.

Details of his death have not been revealed, but Peter underwent spinal surgery last year (2018), and has battled a series of health issues in the past decade.

He took to Twitter in July (2018), to update fans on his recovery following the operation and to explain his absence from social media.

"Sorry, I've been quiet as of late," he wrote alongside a picture of himself lying in a hospital bed. "I've been planning & going through some spinal surgery to improve my mobility."

"It's been a success & I'll be spending the upcoming weeks recovering. A big thank you to the doctors, staff, my family & friends that have helped me through this."

Mayhew pulled out of an appearance at the London Film and Comic Con last summer as a result of the surgery.

Meanwhile, back in 2015 he was hospitalised with pneumonia.

Peter, who stood 7ft 2ins tall, was working as a hospital attendant in London when film producer Charles H. Schneer cast him in "Sinbad and the Eye of the Tiger" and a year later he was on the set of George Lucas' first "Star Wars" movie as Han Solo's wookie co-pilot Chewbacca.

He wrote two memoirs, "Growing Up Giant" and "My Favorite Giant".

Mayhew's "Star Wars" castmate Mark Hamill was quick to pay tribute to Peter upon learning the sad news of his passing, tweeting: "He was the gentlest of giants - A big man with an even bigger heart who never failed to make me smile & a loyal friend who I loved dearly - I'm grateful for the memories we shared & I'm a better man for just having known him. Thanks Pete. #RIPPeterMayhew #Heartbroken @TheWookieeRoars."

Disney boss Bob Iger and famous fans Patton Oswalt and Elijah Wood also offered social media tributes, while bosses at the San Diego Comic Con, where Mayhew was beloved, wrote: "We are deeply saddened to hear of the passing of Peter Mayhew. He was our beloved companion in a galaxy far, far, away. Our thoughts go out to his family, friends, and fans. The force will be with you always, Peter."

Cannes 2019: Quentin Tarantino's 'Once Upon A Time in Hollywood' to Compete for Palme d'Or