Also expressing heartbreak over a series of coordinated explosions that killed more than 200 are Imagine Dragons frontman Dan Reynolds as well as fellow singers Ciara and Kelly Rowland.

AceShowbiz - Mariah Carey, M.I.A. and Mindy Kaling are among the stars to send prayers to the people of Sri Lanka after a series of co-ordinated explosions killed more than 200 on Easter Sunday, April 21.

Officials estimate at least 207 people died in the bombings of four hotels and three churches, where holiday services were being held, in and around the capital of Colombo and in the city of Batticaloa, where 450 others were injured.

As WENN went to press, no one had taken responsibility for the terror attacks, although authorities have arrested 13 suspects in connection to the blasts, which they believed to have been carried out by religious extremists.

The news prompted a string of celebrities to take to social media to express their shock and sadness at the headlines.

"Sri Lanka, my heart is with you. I'm praying for everyone affected by this horrible tragedy. Stay strong," tweeted Mariah Carey, as rapper M.I.A., whose parents hail from the South Asian nation, wrote, "the country shifting from territorial war to spiritual wars (sic). It's still at war."

Mariah Carey sends prayers for the victim in the bombing incident. 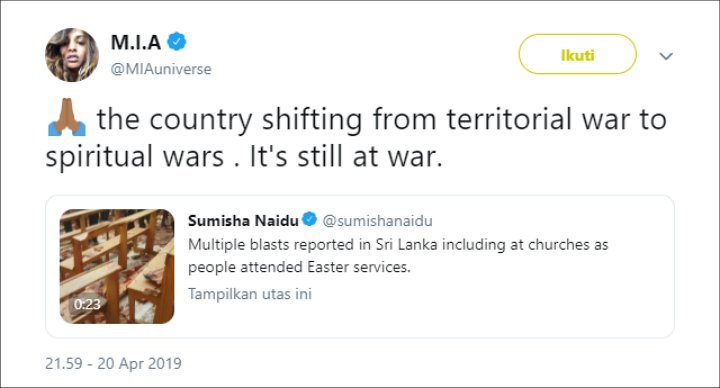 M.I.A. notes about the ongoing war happening in the world.

Imagine Dragons frontman Dan Reynolds shared, "heartbroken for the people of Sri Lanka. there are no words that could possibly bring comfort or understanding at times like these - I can only offer my deepest sorrow and love along with the millions of others mourning today." 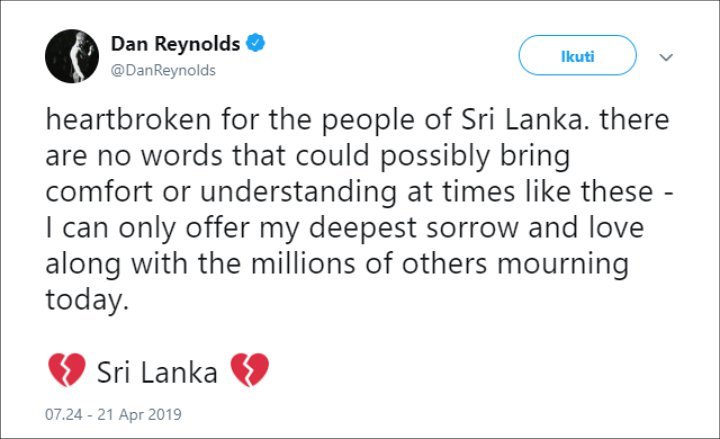 Ciara tweeted, "Praying for you Sri Lanka. My heart is crushed," and Kelly Rowland took to Instagram to write, "On this Resurrection Sunday, I'd like to take the time to simply send love and prayers to Sri Lanka...! Today, please take the time and say a prayer for Sri Lanka! Praying for my brothers and sisters through Christ!"

Meanwhile, actress Mindy Kaling, whose family is of Indian heritage, shared a link to a Washington Post article about the tragedy, and urged fans to "think about including these people in your prayers" on Easter Sunday.

"I'm Hindu, but Easter is one of the most moving and beautiful holidays," she posted. "I do believe in the power of prayer, even from strangers half the world away." 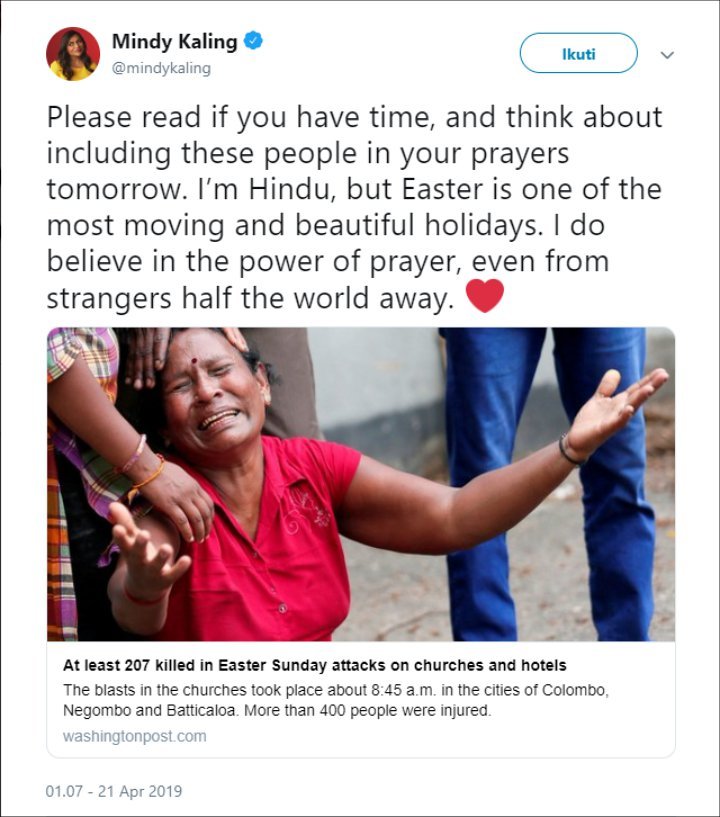 Mindy Kaling urges people to be aware of the bombings.

Eminem Commemorates 11 Years of Sobriety With 'Still Not Afraid' Message

Mariah Carey and Daughter Monroe Do 'Vote' Dance on TikTok