While NBC has yet to comment on the report, 'Chicago Med' star Donnell, who plays Dr. Connor Rhodes, has taken to his Twitter account to confirm his departure from the popular NBC drama.

AceShowbiz - The One Chicago franchise is losing one of its original stars. Jon Seda reportedly is leaving "Chicago P.D." this season. Also departing from the popular NBC drama are Colin Donnell and Norma Kuhling, who will be exiting "Chicago Med" as series regulars. Deadline is the first to report the matter.

It's unknown why the three stars decide to leave the shows. However, the site suggests that the actors leave because of "creative reasons related to the characters' story evolution."

As one of "Chicago P.D." original stars, Seda first recurred on the mothership "Chicago Fire" before he headed to the anchor spinoff as the lead alongside Jason Beghe. He previously left "Chicago P.D." in season 4 to join new legal drama spin-off "Chicago Justice". Seda, however, returned to "Chicago P.D." after the new spin-off was canceled after one season.

As for Donnel, he played Dr. Connor Rhodes on "Chicago Med" since the show's debut in 2015. Additionally, he made several guest appearances on "Chicago P.D." and "Chicago Fire". Kuhling, meanwhile, first appeared as Dr. Ava Bekker in season 2 finale of "Chicago Med" as a recurring character. She was later promoted to a series regular in season 3 of the show.

While NBC has yet to comment on the report, Donnell has taken to his Twitter account to confirm his departure. "Sorry to say that this is true," he writes, much to fans' disappointment. "I love my #ChicagoMed #OneChicago family dearly. And a special thank you to all the fans that have made these last four seasons so amazing." 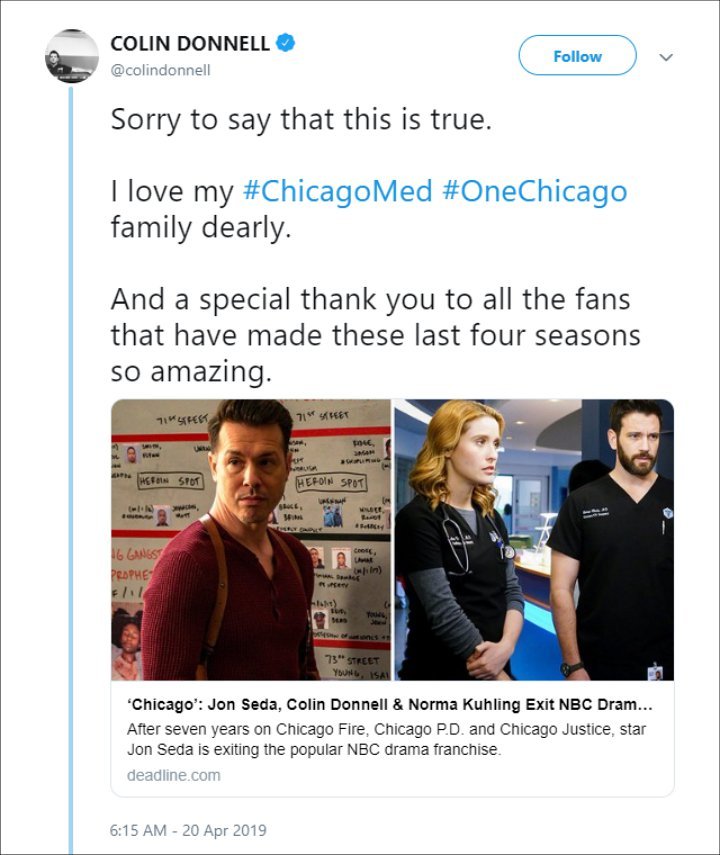 He adds in a separate tweet, "It's been an honor to be a part of such a great trio of shows and in the @WolfEnt family. I know that there's great things coming for Season 5 and I can't wait to see what they are along with all you fans." 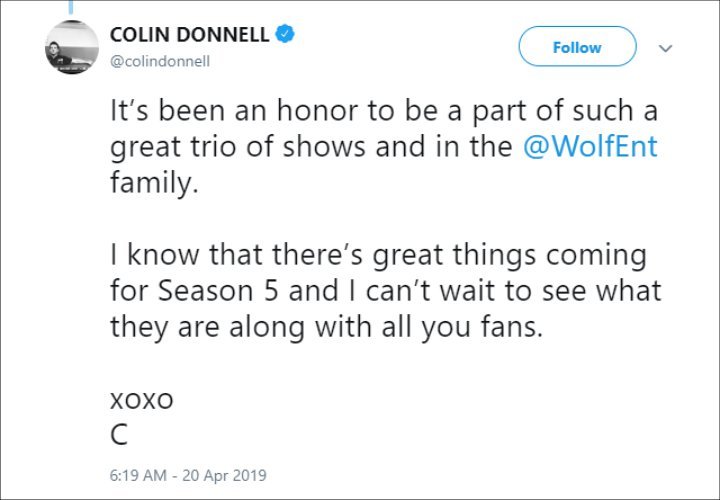 Fans were definitely left heartbroken upon learning the news, though they promised to keep supporting the actor. "It's absolutely heartbreaking to lose Connor as a characters and I've generally grown up with Chicago Med. I'm so thankful that we’ve had the opportunity to see you in action - it's been breathtaking and awe inspiring. Thank you Colin," one fan wrote a heartfelt message.

Another fan added, "Its been an amazing 3 seasons Working with you. Thanks for teaching me how to be cool as a cucumber under pressure. Thanks for being an all around AMAZING guy. Be blessed, can't wait to see what ya Cooking Up."

"My oh my. I had to read this twice to confirm it was true. I started watching Med because of you. I am sorry that you are leaving but I am sure you have something else waiting in the wings. With a broken heart, I wish you the best," another supportive message read.