The dancer, who has appeared in 'The Book of Henry', has been added to the big screen adaptation that will also see Mike Faist as Riff, Paloma Garcia-Lee as Graziella and Ana Isabelle as Rosalia.

AceShowbiz - Teenage dancer and TV star Maddie Ziegler is heading to the big screen after scoring a role in Steven Spielberg's "West Side Story" adaptation.

The 16-year-old, a frequent collaborator of pop star Sia Furler, will serve as a member of the Jets, joining "Dear Evan Hansen" actor Mike Faist as street gang leader Riff, and Paloma Garcia-Lee as his girlfriend Graziella. 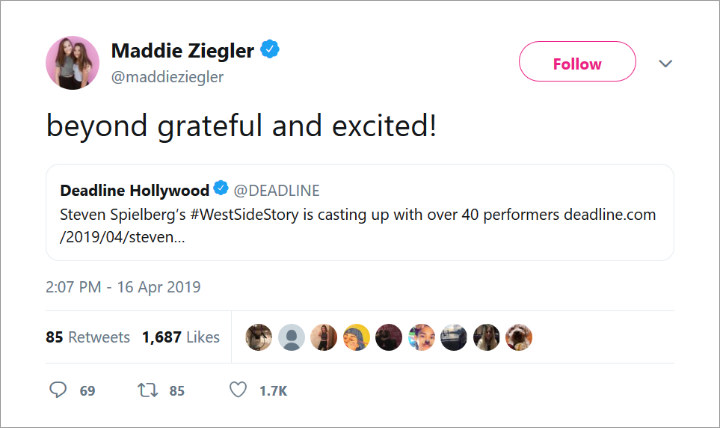 Maddie Ziegler expressed her excitement to join "West Side Story" via a tweet.
See also...

Singer and dancer Ana Isabelle has also been added to the cast as Rosalia, reports Deadline.

They join previously announced leads Ansel Elgort and newcomer Rachel Zegler, as well as Rita Moreno, who will play corner store owner Valentina, almost 50 years after her portrayal of Anita in the 1961 movie musical won her a Best Supporting Actress Oscar.

Filming on Spielberg's new adaptation of the 1957 Leonard Bernstein-Stephen Sondheim stageshow is scheduled to begin this summer.

"West Side Story" won't be Ziegler's first movie role, after previously lending her voice to animated film "Leap!" in 2016, and appearing in "The Book of Henry" in 2017.

Jennifer Lopez to Be Named Fashion Icon at 2019 CFDA Awards