Having had a vow renewal ceremony with her 'Die Hard' star husband, Emma shares a collage of pictures from the special day that captures Demi joining the extended family photoshoot.

AceShowbiz - Bruce Willis and his wife Emma Heming have celebrated their 10th wedding anniversary with a vow renewal ceremony, attended by the actor's ex Demi Moore.

The "Die Hard" action man, 64, originally tied the knot with Emma back in 2009, and on Thursday, March 21, the couple threw a special gathering to mark a decade as a married couple.

The model shared a photo of themselves locking lips as the bride held a white bouquet, and captioned it, "We said, we do, again, 10 years later #happyanniversarymylove."

We said, we do, again, 10 years later 💞💍 #happyanniversarymylove

The 40-year-old went on to share further images from their big day, with one featuring the extended Willis family, including Bruce's first wife, Demi, the mother of his three older daughters.

The sweet picture featured the movie veteran and Emma sitting in the centre of the snap, with their girls Mabel, six, and four-year-old Evelyn by their side.

Also pictured were Bruce and Demi's kids Rumer Willis, 30, and Scout, 27, with the "Ghost" actress beaming at the edge of the group shot. Their youngest child, 25-year-old Tallulah Willis, was not pictured, and it's not clear if she was in attendance. 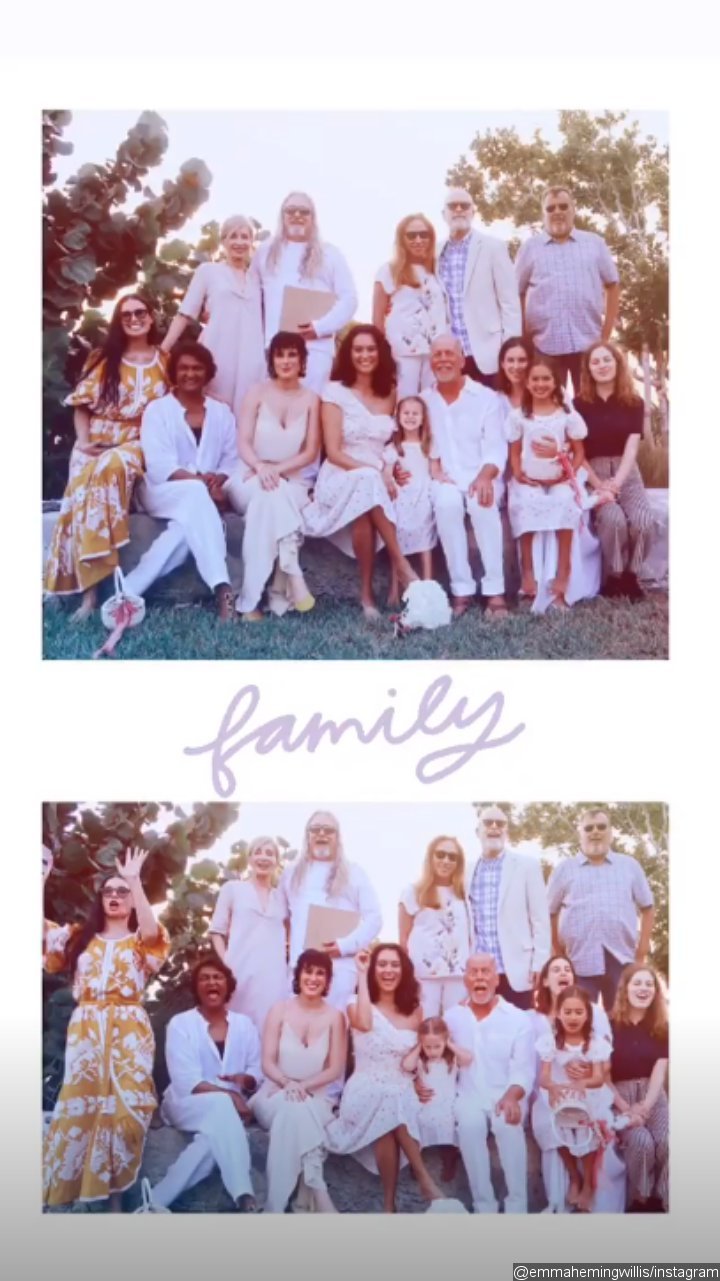 Bruce Willis and Emma Heming's vow renewal is attended by his family and ex-wife Demi Moore.

Demi, 56, has formed a close relationship with Bruce and Emma, and was also present for their nuptials 10 years ago.

Last summer (18), she gamely took part in the Comedy Central Roast of Bruce Willis, cracking joke after joke about her former spouse, tackling everything from his film flops to his parenting skills.

"For those of you that don't know me, I am Demi Moore," she began. "I was married to Bruce for the first three 'Die Hard' movies, which makes sense because the last two sucked."

She then poked fun at his aversion to diaper duty. "Bruce is super generous," she smiled. "When our daughter Rumer was a baby and it was his turn to change the diaper in the middle of the night, he would lean over and whisper to me, 'I'll give you a thousand dollars right now if you change that diaper.' "

"Scout asked me not to say anything, but just last week he offered her a thousand dollars to change his diaper," she added. "Some things never change!"

After Jonas Brothers, These Groups' Reunions Have Been Anticipated the Most by Die Hard Fans

Bruce Willis Breaks Silence After Kicked Out of L.A. Store for Not Wearing Mask