Cardi B Announces Split From Offset Amid New Cheating Allegation

AceShowbiz - Cardi B and Offset are not together anymore. The 26-year-old raptress just dropped the shocking bombshell on late Tuesday, December 4 via Instagram. In a video shared to her followers, the Bronx femcee announced that her relationship with her now-estranged husband had fallen apart in the last few months.

The "Bodak Yellow" hitmaker admitted people had been "bugging" her about their relationship before she finally decided to address it in the clip. "I've been trying to work things out with my baby father," she said, before confirming, "We're not together anymore." Claiming that they've "got a lot of love for each other," she said they would remain "good friends" and "good business partners." She added, "He's always somebody that I run to ... to talk to."

While she didn't detail the reason of their separation, Cardi shared, "Things haven't been just working out between us for a long time. It's nobody's fault. We just grew out of love," hinting that their split was amicable. "It may take time to get a divorce," she added, before ending it by saying, "And I'm gonna always have a lot of love for him, because he is my daughter's father."

There you go..peace and love

The accuser shared an alleged evidence to support her claim, a screenshot of text exchange between Offset and Cuban's friend in which he offered to pay for a flight to bring Cuban and her friend to Atlanta for a night of tryst. 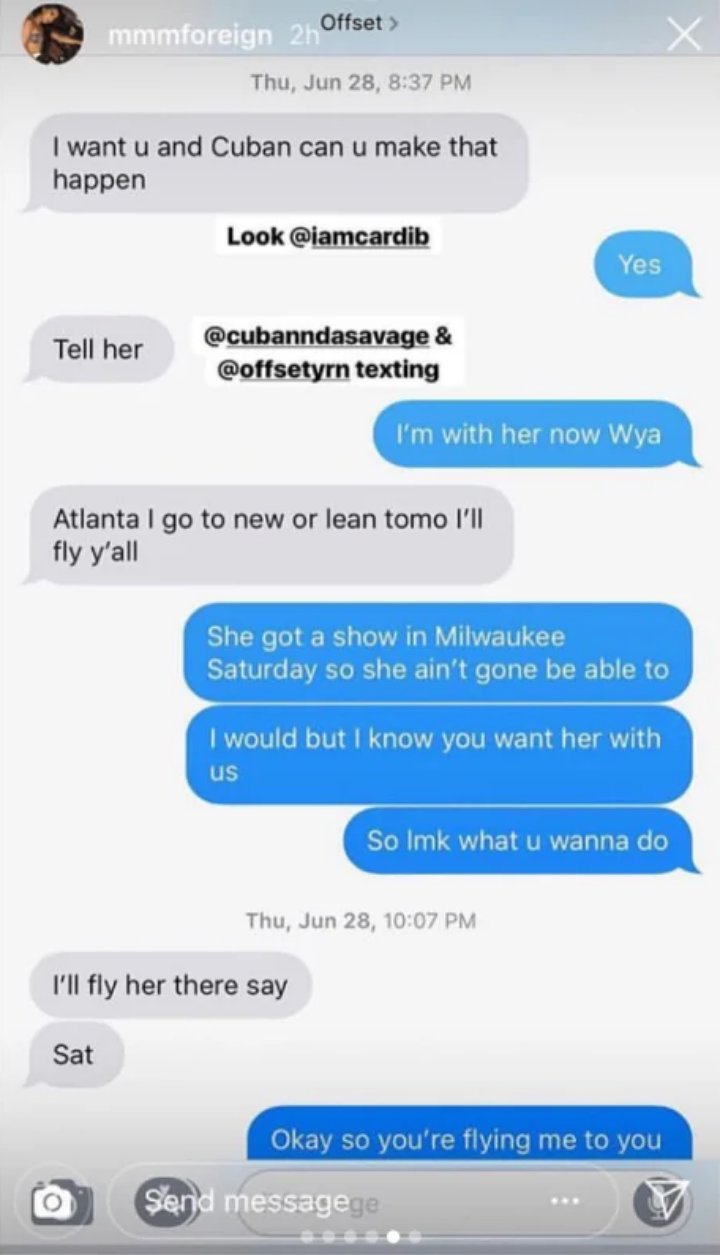 This isn't the first time Offset was accused of being unfaithful to Cardi. The Migos star previously cheated on Cardi before they got engaged. She decided to stick with him at the time.

Cardi did not address the new cheating allegation in the Instagram video, but her fans have been sending messages of support to her. "Keep it movin baby. Keep your head up, stay focused on your career and your baby. You tried, gave it your best, now you got more work to do," one wrote in the comment section of her post. "You came along long way, don't let this break or stop you ever! He ain't worth it!!!! God has blessed you extremely. And it's just the beginning. ... Praying for your heart and peace beautiful."

Some others, however, think that Cardi's split announcement was just a "prank." One commented, "This is a prank. He still got her on his ig. STOP CARDI."

Cardi B Lashes Out at Troll Calling Her Daughter 'Autistic'