The South African model is seen stripping down to her birthday suit while cradling her growing baby bump and covering her bare breast with one hand.

AceShowbiz - Being pregnant doesn't stop Candice Swanepoel from posting racy pictures. In a photo shared on her Instagram account, the 29-year-old Victoria's Secret Angel could be seen stripping down to her birthday suit, showing off her growing bump.

Leaving little to the imagination, Candice covered her bare breasts with one hand, while the other hand was placed on her baby bump. The model got even more cheeky as she gazed seductively into the camera, letting her blonde locks down. "Body blossoming," she captioned the pic. "The path between spiritual and physical ...aren't women amazing?! #6months." 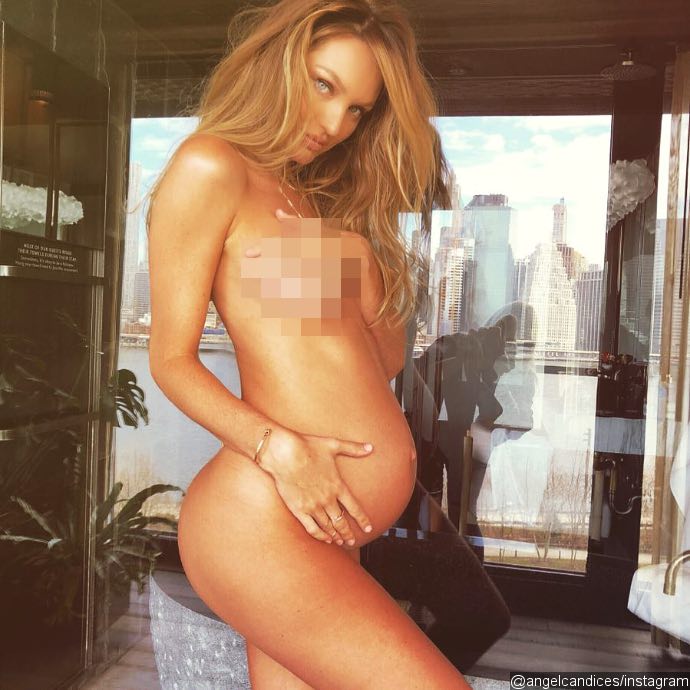 The model has been documenting her pregnancy journey through Instagram. Earlier this year, she shared a series of pictures of herself enjoying her vacation in Brazil along with pal and Dutch model Doutzen Kroes and her family. One photo saw Candice, baring her growing belly in a gray two-piece bathing suit, flashing a big smile as Doutzen's young daughter Myllena stared at her baby bump.

Doutzen also shared on the site some pictures from their fun-filled vacation, one of which found her and Candice lounging with their backs against each other's. "Enjoying the sun with gorgeous soul," so the "Justice League" actress captioned the snap.

Candice is pregnant with her second child with longtime partner and fellow model Herman Nicoli. The South African model announced the happy news with her fans by sharing a sweet baby bump photo in mid-December last year. "Christmas came early," so she captioned the pic, which featured her cradling her baby bump in a green off-the-shoulder gown.

The pair are already parents to a son named Anacan, who was born on October 5, 2016. The blonde bomshell and the Brazilian model, who first met in Paris, have been dating for about ten years before announcing that they were engaged in August 2015.

Priyanka Chopra Lost a Movie Role Due to Skin Color