The pregnant model takes to social media to share a couple of photos featuring her flaunting her growing baby bump in a sexy two-piece and putting her behind on display to show off her tan lines.

AceShowbiz - Pregnant Candice Swanepoel has been enjoying her vacation in Brazil along with pal and Dutch model Doutzen Kroes and her family. The Victoria's Secret Angel, who is currently expecting her second child, has shared a couple photos from their winter sun-filled vacation on her Instagram account.

One photo saw Candice, baring her growing belly in a gray two-piece bathing suit, flashing a big smile as Doutzen's young daughter Myllena stared at her baby bump. "Special moments," so the 29-year-old model captioned the sweet pic. "Myllena fascinated with my growing belly," she added.

The other post was a cheeky bum photo of her and her pal Doutzen. To show off their tan lines, the two beauties adjusted their bikini bottoms to the camera. The photo shared on Wednesday, January 10 was seemingly taken by their photographer pal Jerome Duran as Candice tagged him in the snap. 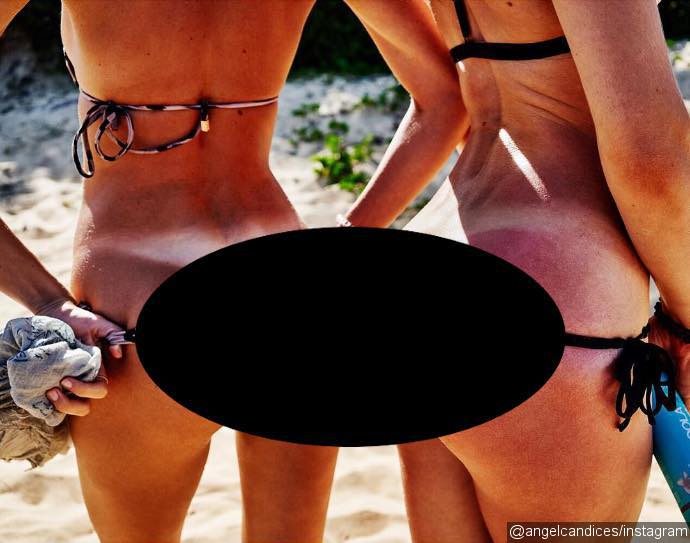 The previous day, Doutzen shared another photo of them together from their fun-filled vacation. "Enjoying the sun with this gorgeous soul," so the "Justice League" actress captioned the snap which found them lounging with their backs against each other's. She added the hashtags #vacationdays, #bahia and #brasil.

Candice is pregnant with her second child with longtime partner and fellow model Herman Nicoli. The South African model announced the happy news with her fans by sharing a sweet baby bump photo via Instagram in mid-December. "Christmas came early," so she captioned the pic featuring her cradling her baby bump in an off-the-shoulder green gown. She added the hashtag, #2.

The model gave birth to her first child, a son named Anacan, last year, and she made her return on the catwalk on the 2017 Victoria's Secret Fashion Show in Shanghai, China in November. Earlier this year, the model shared a sweet picture of herself getting her "first kiss of 2018" from her son. She rocked a red polka dot bikini while holding Anacan in the pool.