The Motley Crue drummer gets into a fight with his son that leaves him with swollen and bloody lips.

AceShowbiz - Tommy Lee apparently has unhealthy parent-and-children relationship with Brandon, his son with ex-wife Pamela Anderson. The 55-year-old rocker had a physical conflict with Brandon on Monday, March 5. He was knocked unconscious by his son, leaving him with swollen and bloody lips.

The fight was so bad that cops were called to the rocker's house on Monday night around 10:49 P.M. The L.A. County Fire Department who responded to the call said that Tommy had been assaulted. He was transported to the hospital around 11:35 P.M., The Blast reported.

It was unclear what sparked the father-and-son fight. However, according to TMZ, Brandon punched his father in defense when the rocker got drunk. Tommy, whose birth name is Thomas Lee Bass, took to Twitter to deny the report. He wrote, "Hey @TMZ maybe get your facts straight before you go reporting bulls**t. My fiancee and I were in bed when my son busted into the room and assaulted me. I asked him to leave the house and he knocked me unconscious. He ran away from the police. THAT'S the truth."

Hey @TMZ maybe get your facts straight before you go reporting bullshit. My fiancé and I were in bed when my son busted into the room and assaulted me. I asked him to leave the house and he knocked me unconscious. He ran away from the police. THAT’S the truth.

Noting his son's behavior and the fight, Tommy posted a picture of his bloody lips on his social media account. He captioned it, "My heart is broken. You can give your kids everything they could ever want in their entire lives and they can still turn against you. Good job Brandon! Great son!" However, this post has been deleted from the account. 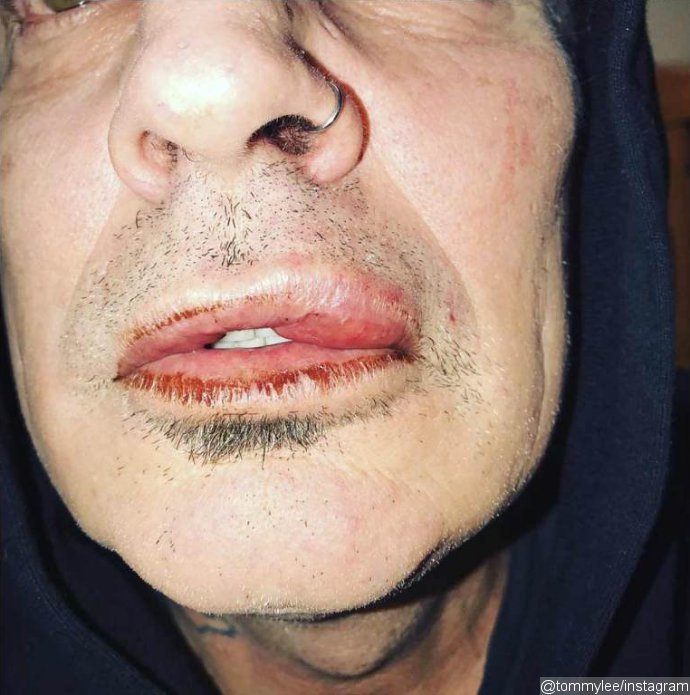 Texas-based broadcaster David Goins criticized Tommy for sharing the picture of his injured face on social media, "sounds like you're confusing wants and needs, all kids want stable, supportive parents who offer unconditional love, (which would include not posting a photo to seek sympathy from sycophant burnouts)."

Tommy responded to the comment by saying, "Aint nobody seeking sympathy jack a** just telling the truth." The broadcaster replied, "Your truth-albeit one sided-that the very public expense of your son."

Tommy Lee Waits for Right Time to Be Wingsuit Skydiver