The couple, who has been married since 2011, was joined by their six children during the ceremony that was seemingly held during their family vacation in Turks and Caicos earlier this year.

AceShowbiz - Kim Zolciak and her husband of six years, Kroy Biermann, have tied the knot once again, after the actress announced in March that the couple was planning a "romantic, beautiful" vow renewal ceremony. Kim has shared on her Instagram account several photos from the beach ceremony that was apparently held during their family vacation in Turks and Caicos.

I'd go to the end of the earth for you ❤️

In one of the photos she shared on Sunday, May 14, Kim and Kroy walked hand-in-hand as they strolled down the beach. The "Don't Be Tardy..." star looked stunning in a strapless white bridal gown with a big bow in the back from designer Leanne Marshall. Kroy, meanwhile, looked sharp in a tan suit. "Life is but a dream," so she captioned the photo.

Kim and Kroy were joined by their six children who all decked out in beach wedding attire. The 38-year-old reality TV star posted on the photo-sharing platform an adorable family photograph which found them looking back to the camera. "I am the LUCKIEST wife/mother on this planet! I never will ever take my family for granted! God is so good!" so she captioned the picture.

Kim also shared a topless photo of her that was apparently taken after the ceremony was over. In the snap, she only donned a white flowing skirt as she gazed down into the ocean while covering her modesty with her right hand. She simply captioned the raunchy picture with a love emoji. 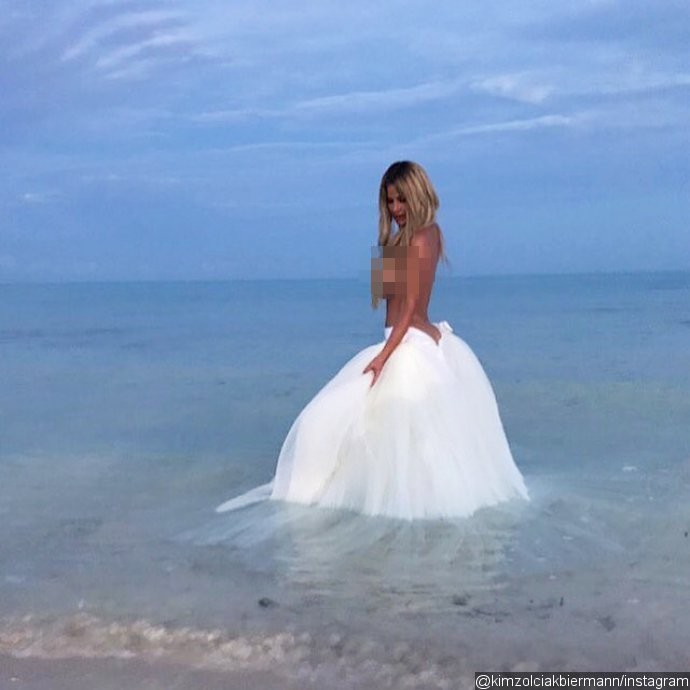