The reality TV star, who turned 38 on Tuesday, April 18, took two of her kids, Mason and Penelope, along with Scott and sister Kendall Jenner to the happiest place on earth to enjoy some fun rides.

AceShowbiz - Kourtney Kardashian rings in her 38th birthday with special persons in her life. To celebrate turning another year older, the mother-of-three traveled to Disneyland in Anaheim, California along with ex Scott Disick and two of their kids, Mason and Penelope, on Tuesday, April 18. Kendall Jenner reportedly also joined the family to enjoy some fun rides.

The group was spotted throughout the day at the happiest place on earth as they were photographed enjoying iconic the Big Thunder Mountain Railroad ride. Kourtney and Scott sported matching black T-shirts and pairs of blue jeans. They completed their looks with black shades. Penelope, meanwhile, looked adorable in a white tee as the wind swept through her blonde locks. 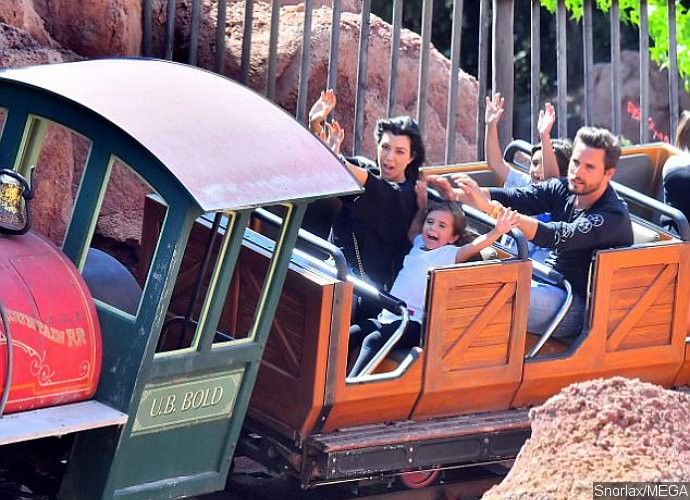 Some of the theme park attendees took to Twitter to share their excitements after they spotted the reality TV star. "Just saw @kourtneykardash at Disneyland. Hope Penelope has a great day #happiestplaceonearth," a user wrote, while another took a picture of the family when they're strolling the park.

Kourtney celebrates her 38th birthday by sharing on Instagram a naked photo of her while posing in a pool of water. Shot by acclaimed photographer Mike Rosenthal, the raunchy snap finds the "Keeping Up with the Kardashians" star putting her perky derriere on display. She simply captioned it, "birthday suit."

The Disneyland outing comes on the heels of Kourtney and Scott's little family enjoying a relaxed dinner at Japanese restaurant Nobu in Malibu. In some photos obtained by Daily Mail, they arrived at the posh diner with their car. A doting mother, Kourtney could be seen carrying her youngest children Reign against her hip, while her baby daddy Scott was busy taking care of Mason and Penelope.

'The Voice' Playoffs Night 2: Coaches Round Out Final Top 12

Video: Kourtney Kardashian Gets Confronted by a Mob of Angry Anti-Fur Protesters