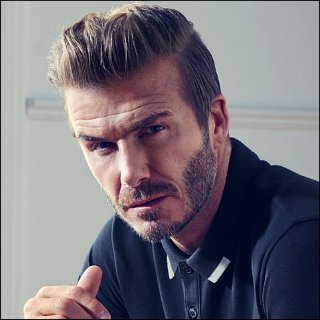 A remarkable soccer player known for his distinguished style of wing play, David Beckham is undeniably one of the most celebrated global sporting icons who is also recognized as a famous public figure that even non-sports fans cherish of. The fact that he comes from a family who actively supported Manchester United Football Club certainly has provided more than enough explanation about the main factor that triggered him to develop a fondness for soccer at such a young age. Born on May 2, 1975 in Leytonstone, London, England with the name David Robert Joseph Beckham, the kid undoubtedly got the full encouragement to join soccer competitions, including that at %cBobby Charlton%'s young player training school in which he won the prize to have a training session with FC Barcelona. Much to his delight, this initial achievement led him to an offer to be a trainee in his favorite team, Manchester United, thus quickly signed its youth training scheme contract on July 8, 1991 without any further consideration.

With his previous experience of having trials with Leyton Orient F.C. and attending Tottenham Hotspur's school of excellence, David really stood out among his peers, especially when he helped United to win the FA Youth Cup in May 1992. Going a notch higher, this fair-haired guy then was included in the first team as the substitute for %cAndrei Kanchelskis% in Rumbelows Cup against Brighton and Hove Albion by the following September. Within four months he had already turned to professional, but it was not until his club faced Leeds at Old Trafford on April 2, 1995 that the tall athlete finally encountered his first Premiere League appearance. Played predominantly in the right midfield position, he soon gained public notice with his excellent skills of scoring great goals which brought The Red Devils to be a treble winner of FA Premier League, FA Cup, and FA Charity Shield in 1996.

Also made his international debut in 1996 as a part of the national squad in a game against Moldova, David strengthened his position in United's regular team when he gave large contribution in retaining the club's status as FA Premier League also FA Charity Shield winner in 1997. Consequently voted PFA Young Player of the Year by fellow soccer players in the same year, he wonderfully was chosen by %cGlenn Hoddle% to join England national football team for the 1998 World Cup in France. However, his delight immediately turned to dismal as he was accused to be the one who caused the defeat of England from Argentina in the round of sixteen after he got the red card for kicking %cDiego Simeone%, the opponent team's player. Becoming a target of harsh criticism and mental abuse back in his homeland, the midfielder frequently received various kind of derision from opposition supporters whenever appeared on court afterwards.

During this dark period, a flicker of joy fortunately came down upon David as his fiancee, %cVictoria Adams%, a %cSpice Girls%' former member, gave birth to their first son, Brooklyn Joseph, on March 4, 1999. Subsequently married her exactly four months later in Ireland, he was truly given endless support either from his family or fans to keep moving on and he responded by displaying consistent play throughout the rest of season 1998-1999. Contributed in a significant number of United's goals through his crossing to forwards %cDwight Yorke% and %cAndy Cole%, he satisfyingly led the club to acquire another triple credit for winning FA Premier League, FA Cup, and UEFA Champions League. Nevertheless, things still did not run quite smoothly for he again encountered unpleasant jests at Euro 2000 while his relationship with The Red Devil's manager, Sir Alex Ferguson, began to deteriorate due to his growing celebrity status after marrying Victoria.

January 2001, however, became a turning point for David when he was appointed to be the captain of England's national squad by %cSven-Goran Eriksson% who replaced %cKevin Keegan% as the team's manager. Wanting to restore his reputation also get back people's respect on him, he strived hard to qualify England for the 2002 World Cup and fabulously produced a goal through his last-minute free kick during the game against Greece in October, thus made a draw of 2-2. Since England only needed a tie in this match, the score had certainly ensured England's place at the prestigious international competition, marking David's conversion from despised villain to a real national hero in the blink of an eye. In the meantime, he continued delivering his fine knack which helped United to maintain its status as FA Premier League winner so that it was not really surprising when he then was named the BBC Sports Personality of the Year.

Despite his metatarsal injury that occurred while playing against Deportivo La Coruna in April 2002, David persisted in participating at the 2002 World Cup, therefore went aboard along with the national team to the host of the tournament, Japan and Korea. Even though England in the end was beaten by Brazil in the quarterfinal, it was him who paved the way to that point after scored the only goal for England through a penalty when facing Argentina in the first round. Returned to the country to welcome his second son, Romeo James on September 1, 2002, this striking player once more experienced injury in November so that he had to rest for quite a long period before managed to re-appear on the court by January 2003. Unfortunate for him, a shocking incident then happened a month later as Ferguson accidentally struck him over the eye with a soccer boot in the dressing room following United's defeat to Arsenal, causing a cut which required stitches on his forehead.

This happening apparently convinced David to leave Manchester United as he later signed a four-years deal with Real Madrid on June 17, 2003 and officially joined the Spanish club on July 1. By this time, his celebrity status had flourished increasingly for he accepted lavish contracts to be the model of various brands while also became one of the most sought figures of the paparazzi's camera. The exposure went greater when he was reported to have sex affairs with former personal assistant, %cRebecca Loos%, and an Australian model named %cSarah Marbeck% in 2004, thus ignited the speculations about the crack in his marriage. This got worse as his former nanny, %cAbbie Gibson%, confirmed that he and Victoria indeed faced a breakdown in their relationship through an exclusive interview held by British tabloid newspaper, News of the World. Strongly denied all the tidings, the couple then decided to place a lawsuit against Gibson in April the following year.

Undeterred by the distressing publication, David and Victoria kept maintaining their marriage well and happily embraced the arrival of their third son, Cruz Beckham on February 20, 2005 in Madrid, Spain. Meanwhile, his performance under Real Madrid was still impressive as he successfully produced 4 goals during the 2004-2005 season, but his temper on court got uncontrolled for he had received three sending off by December 2005. Aside from this flaw, he once again joined the national team to compete at the 2006 World Cup in Germany and has been expected to be the squad's captain for the second time. One of only three players to have appeared 100 times in the Champions League, he has already made his 85th appearance for England by the year 2005 and is on his way to land the 100th one, a rare record in his country that few British players had achieved.

On July 12, 2007 the soccer stud finally brought along his Posh wife and three sons to LA to permanently reside in their new home there following his being signed to play for the Los Angeles Galaxy of Major League Soccer, which was widely believed to be worth of US$250 million. It was not until the following day that David was officially introduced as the new member of the soccer team.