The seven-time All Star shows support to the WNBA star after she's released by the Russian government in 1-for-1 prisoner swap for arms dealer Viktor Bout.

AceShowbiz - Kyrie Irving is no stranger to speaking on controversial issues. While the NBA star has gotten in trouble for some of his takes, there are times when he makes some poignant remarks. One of those instances came when he supported Brittney Griner following her release from a Russian prison.

Making use of his Twitter account on Thursday, December 8, the seven-time All-Star wrote, "Welcome Home BG! Thank you for exemplifying what a true Warrior spirit looks like." He continued, "You're forever loved by so many unconditionally."

Then one of his fans replied to his post, "Now free all of our brothers and sisters that are not celebrity athletes [a bunch of eyes emojis]." Seemingly agreeing to the tweet, Kyrie, who's recently dropped by Nike over his anti-Semitism scandal, retweeted it and added a fingers-crossed emoji, which is commonly used as a gesture indicating luck, and an infinity symbol. 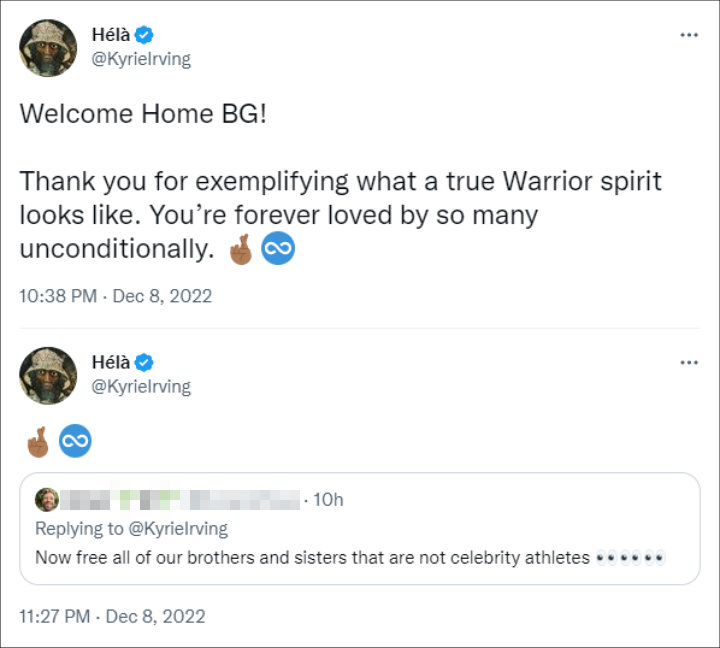 Earlier on Thursday, news broke that Brittney has been released from the Russian prison after the United States government was able to negotiate a prisoner swap. The person sent back to Russia is notorious arms dealer Viktor Bout, known as "The Merchant of Death". Additionally, the U.S. tried to free Marine Paul Whelan, but Russia was unwilling.

Footage of Brittney's release has since been released online. Shot by Russian state media outlet TASS, the footage captured the WNBA star as she signed a document before heading to an awaiting car. She then got into a plane and showed off her passport.

Brittney, who was accused by Russian authorities of carrying hashish oil in her luggage, was all smiles on the plane, telling someone that she was "good" and "happy." She wore a gray beanie but it can be seen that her signature dreadlocks have been cut off. She's still sporting her long hair when she was seen at a court hearing in late October.

Also reacting to Brittney's release was President Joe Biden. Turning to his official Twitter account, he wrote, "Moments ago I spoke to Brittney Griner. She is safe. She is on a plane. She is on her way home."