AceShowbiz - Lauren Jauregui has finally reacted to a viral clip of her derriere at the 2022 American Music Awards. Taking to her social media platforms, the former Fifth Harmony member expressed what she really felt about it.

Lauren's dress had people talking. The high-neck sage-colored gown, which was designed by Norma Kamali, has a print of crystals as well as a jacket with matching pattern. Unfortunately, the jacket turned out to be a bit of an optical illusion. She appeared to sport a massive butt in several photos and footage from the event held on Sunday, November 20 at the Microsoft Theater in Los Angeles.

Addressing the issue, Lauren took to her TikTok page to clear things up that it wasn't her real booty. "It's a jacket omg y'all," the "Work from Home" singer replied to a fan's video of herself posing on the red carpet and audio that said, "What are you doing out here with all this a**? Hella a**."

As if it's not enough, Lauren turned to Twitter to set the record straight. Alongside a series of pictures that saw her rocking the dress, the "Worth It" singer wrote, "Lmfao nobody told me my jacket made my a** look like this I'm crying." 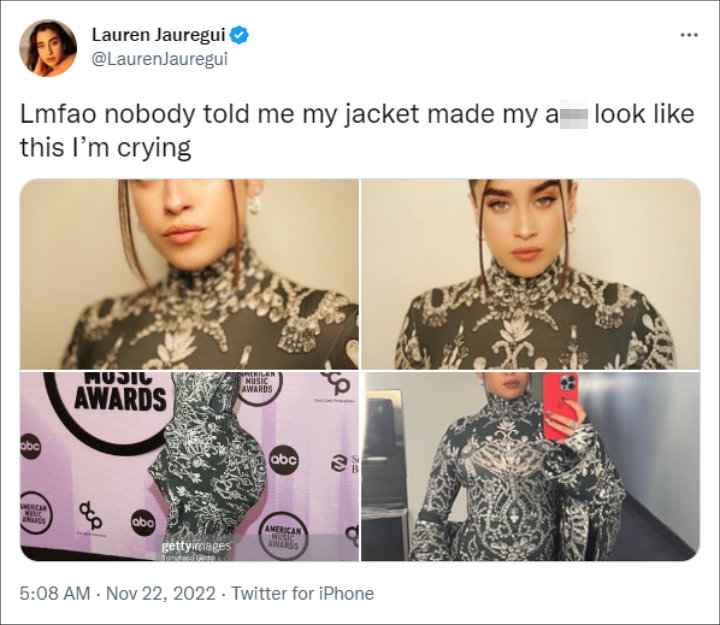 Previously, her fans were stunned byer "fake" big booty. "THE WAY I FROZE IN MY TRACKS WHEN I WAS WATCHING THE LIVESTREAM," one person commented on her TikTok post. A second added, "I had to do a double take when i first saw this [laughing with tears emoji] but you still slayyed queen."

"I gasped when I first saw it pls," a separate person noted, while someone else wrote, "I was so confused. Thank you for telling us this queen." Another TikTok user admitted, "it took so long for me to notice the jacket." A different person found the way Lauren addressed the matter funny, "BAHAHAHAHA the way you had to clear it up lmfaoooo."

Amber Heard's Rumored Girlfriend Blocked by Organization That Supports Her

Lauren Jauregui Likens Two-Faced People to 'Mean Spirits': 'I Don't Vibe' With Them