In a new episode of 'The Kardashians', the reality TV star addresses the viral scandal when she edited Khloe Kardashian's daughter True's face into Kylie Jenner's daughter Stormi's body in a Disneyland picture.

AceShowbiz - Kim Kardashian laughed off getting busted for her infamous Disneyland Photoshop fail. In the Thursday, November 3 episode of "The Kardashians", the reality TV star addressed the viral scandal when she Photoshopped Khloe Kardashian's daughter True's face into Kylie Jenner's daughter Stormi's body in a Disneyland picture.

During lunch with sisters Khloe and Kourtney Kardashian, Kim brought up "the True Photoshopping story" with Khloe apologizing for the media frenzy that had ensued. The Good American founder confessed, "Oh my God, I'm so sorry. I forgot we made up that story."

Kim then explained that she had taken "the cutest picture" of her daughter Chicago and Stormi while they were at Disneyland together back in December. The SKIMS founder pointed out that both girls were "wearing pink" and she desperately wanted to have the snap on her Instagram grid because she was only "doing pinks and blues" at the time.

"There was the cutest picture of Chi and Stormi at Disneyland, and they're wearing pink," Kim shared. "I sent it to Kylie for approval, and she goes, 'No, I really don't want any pics of Stormi out right now.' I respect it. So I Photoshop True's face onto Stormi's body."

Kourtney was in disbelief as she responded, "I've seen this and I was thinking there's no way anyone would ever do that." Khloe, meanwhile, elaborated, "She sent it to me and I was like, 'Wait, you took True to Disneyland without me?' She's like, 'No, but I'm happy you thought that.' "

Khloe was actually the first one who admitted the editing. The 38-year-old star slipped up and told fans months later that it was True's first time at the theme park when she went to the happiest place on earth to celebrate her 4th birthday in April. "Yeah, and then you posted True's first time," Kourtney noted. "Everyone thinks it's a major scandal."

Kim later broke the third wall and talked directly into the camera. "You heard it here first. It's not a major scandal. I just wanted my grid pink and blue. Photoshop fail, but whatevs." 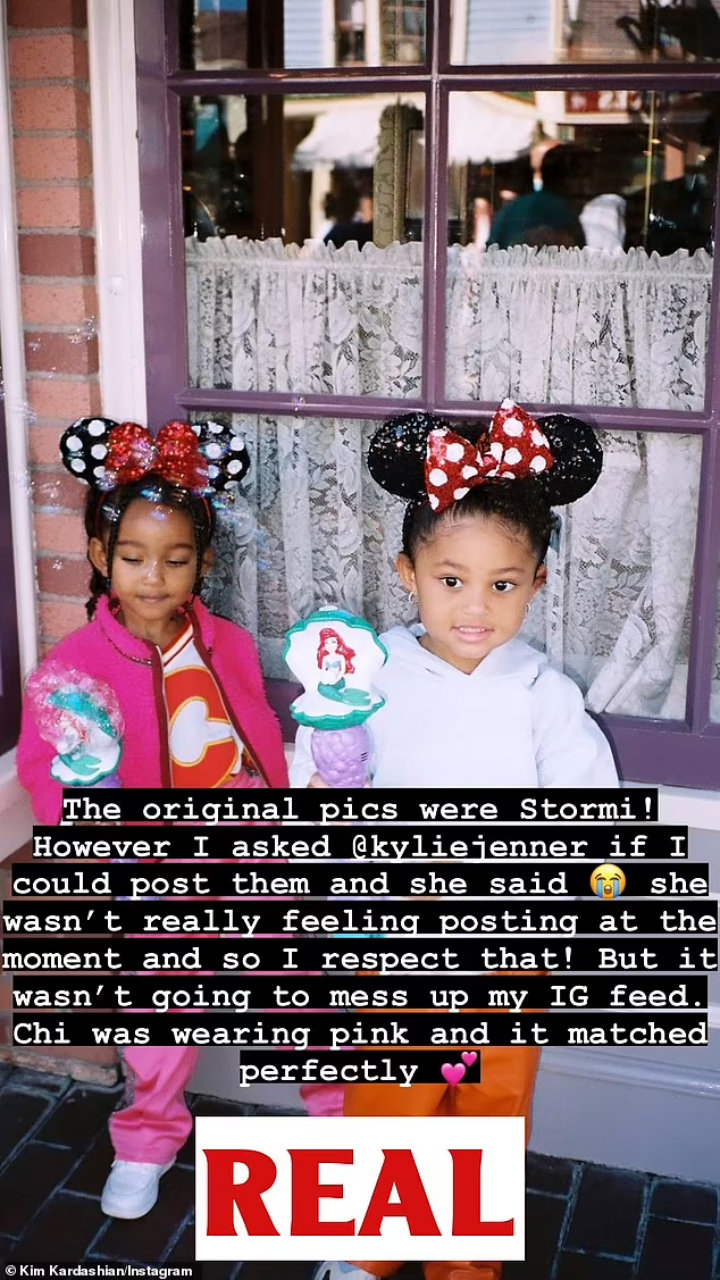 After Khloe's slipup, Kim then came clean and confirmed the snafu in an Instagram Story. "The original pics were Stormi!" Kim said at the time while posting the original with her caption. "However I asked @kyliejenner if I could post them and she said [insert crying face] she wasn't really feeling posting at the moment and so I respect that! But it wasn't going to mess up my IG feed. Chi was wearing pink and it matched perfectly."

Adele Reveals How to Correctly Pronounce Her Name

Kourtney Says She's Pressured to Have IVF, Slams 'The Kardashians' Producers Over Her Storyline