The aspiring chef slams Internet speculation after he's pictured sitting alone on the curb outside a posh restaurant in Los Angeles following dinner with his wife.

AceShowbiz - Is the honeymoon phase already over for Brooklyn Beckham and Nicola Peltz? Maybe not so fast. The son of David Beckham and Victoria Adams has set things straight after he and his wife appeared to leave restaurant separately following a dinner date.

On Sunday, September 4, the newlyweds had dinner at Cecconi's West Hollywood in Los Angeles. While they reportedly arrived together, they seemed to be leaving separately, with Brooklyn allegedly being left alone at the posh restaurant.

A picture obtained by Daily Mail shows the 23-year-old looking dispirited while sitting on the curb and looking at his phone outside the dining place. He then gave a thumbs up and flashed a forced smile to the paparazzi as he headed to a car, which apparently came to pick him up.

After the photo circulated online and fueled a rumored rift between Nicola and Victoria, both the "Transformers: Age of Extinction" star and Brooklyn have laughed off the Internet speculation. The actress posted on her Instagram Story, "When you exit out the alley to avoid the paps and do it well enough that they think @brooklynpeltzbeckham left alone."

Brroklyn then reshared Nicola's post on his own Story. He added over it, "Don't believe everything you read." 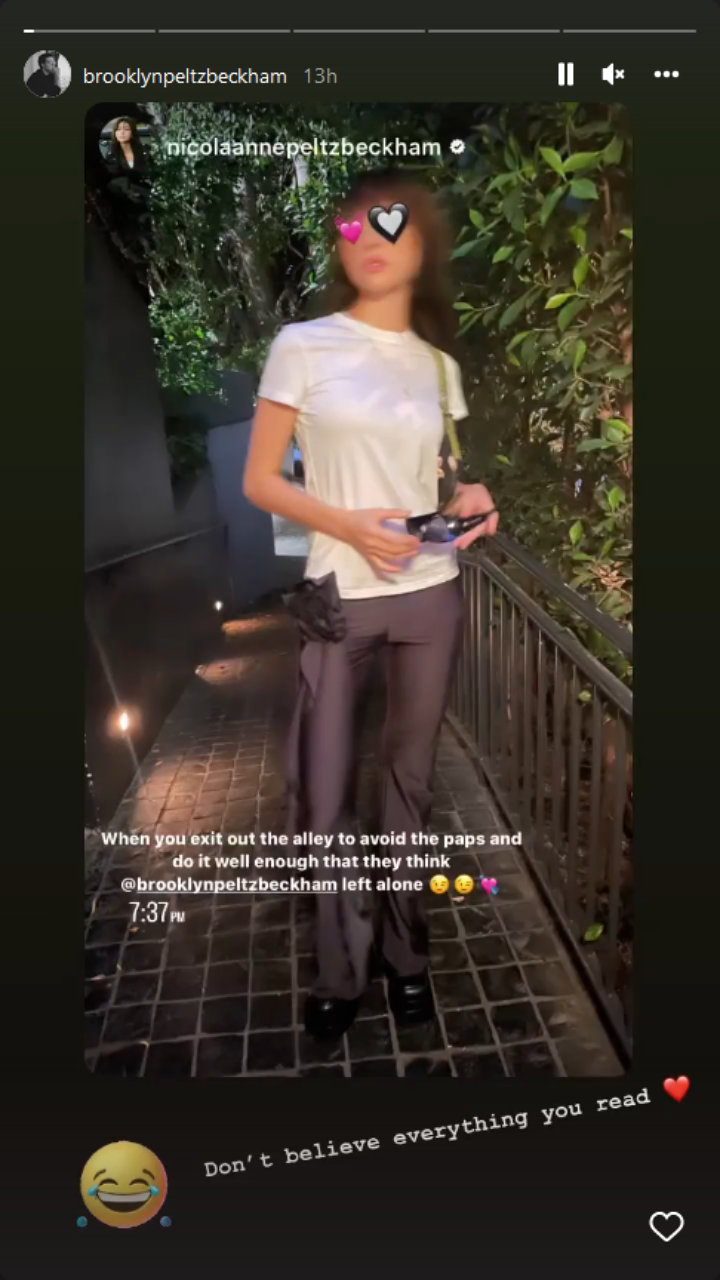 The rumored feud between Nicola and Victoria reportedly started with the young couple's wedding. The 27-year-old beauty reportedly refused to wear a dress that her mother-in-law designed for the big day.

Addressing the rumors, Nicola said, "I was going to [wear the dress] and I really wanted to, and then a few months down the line, she realized that her atelier couldn't do it, so then I had to pick another dress."

"She didn't say you can't wear it; I didn't say I didn't want to wear it," the "Bates Motel" alum went on elaborating. "That's where it started."

However, the rumors refuse to die down. Recently, Victoria snubbed her daughter-in-law when praising Brooklyn for his photo shoot for Vogue Hong Kong, which the actress participated in. "So proud!!" she wrote while only tagging her eldest son and the publication.

A source said the rift between her and Nicola has left the former Spice Girls member "heartbroken." A source said, "Victoria loves having all of her children around her, it is how she loves to spend her time the most. She has always been so warm and welcoming to her sons' girlfriends and absolutely adored Nicola from day one. But things have got tricky and it is upsetting for her, she is heartbroken."

The source additionally told the MailOnline, "She and Brooklyn have always had such a close relationship, he was her comfort blanket when things were difficult in the Beckham marriage. She would also take Brooklyn to events as he was growing up where she would describe him as her date. She has found all of this very difficult."