The 'Up' hitmaker is going back-and-forth with Nicki Minaj's stylist who drops some shocking claims about the Bronx femcee, insinuating that her husband slept with Quavo's ex-girlfriend.

AceShowbiz - Cardi B has been staying by Offset's side through thick and thin and that's not going to change anytime soon. Amid his feud with his label Quality Control Music, the Grammy Award-winning raptress has defended her husband against allegations that he cheated on her with Saweetie.

The rumors first surfaced on Wednesday, August 24 after Nicki Minaj's stylist dropped some shocking, but baseless accusations about Cardi and her husband Offset through Twitter. Khalil, who is also connected to Rubi Rose, claimed that Offset cheated on Cardi with Saweetie and that Cardi also promised to pay off the two bartenders she allegedly attacked at a strip club for sleeping with Offset.

"Oh and @iamcardib when you gone Run Rachel and Sarah they coins? No they're not gonna settle for the 4M you keep trynna offer them... stop duckin the court cases and PAY UP," read one of the tweets.

Cardi, however, denied that she offered money to the girls to settle the assault case, which is still ongoing. "Why you lying on me and those girls for I have a open case EVERYTHING IS PUBLIC offering money will not benefit me and actually get me in real trouble you making up anything cause you decided to come for me after coming out of jail for stealing 3k worth of clothes," the mother of two argued.

She added in a separate post, "One thing about them tables ...you gotta sleep on top of them wit a sheet for stealing three thousand dollars worth of clothes."

In another tweet, the stylist claimed, "Offset f***ed Saweetie! Do you wanna really discuss husbands?" To this allegation, Cardi replied, "Ouuuuuu my man got a couple weed charges and gun charges cause he ain't no P***y and was a hustler …rather d**k slinging then taking P***y from b***hes ….you bringing my nikka up trying to get me mad …LETS NOT TALK ABOUT HUSBANDS NOW."

Khalil further pushed the narrative as adding, "I'm still gaggin at you blatantly lying about OFFSET FCKN SAWEETIE." Cardi once again denied it, asking for receipt. "No baby you lying ! You makin crazy lies starting s**t and putting female rappers in it WIT NO RECEIPTS,no blog ever spoke on this all of a sudden you come out of jail 5 days ago and you made up for lied in 2 hours wit NO RECEIPTS!" she wrote. 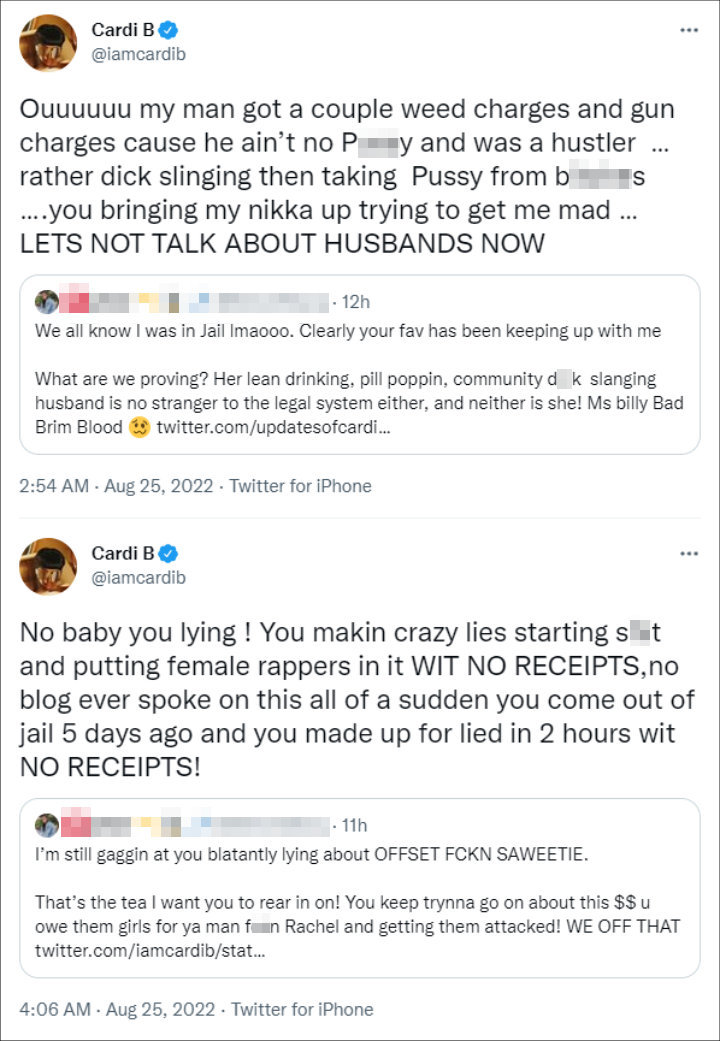 Cardi B responded to allegations that Offset cheated on her with Saweetie.

But Khalil isn't the only one suggesting that Offset caused Migos' split with his alleged sexual relationship with Saweetie, who is his groupmate Quavo's ex-girlfriend. Blogger Tasha K, who was previously embroiled in a legal case with Cardi, wrote on one of her Instagram posts, "Cardi needs to ask Offset how much P**** did he take at John Walls Party last night? She wasn't there, but he was..Oh and did Saweetie give back the anklet that Offset made for her out of a chain that he had."

Meanwhile, Gossip of the City backed Cardi's claim, saying that "Offset didn't sleep with sweetie." As to Migos' rumored breakup, the blog explained, "Ouavo and Offset not really talking due to the issues with P. It's easy to make people believe the narrative that it's about Saweetie due to the recent story of offset and P. But it's a lie. Takeoff and Offset somewhat still cool though. But Offset alone in this fight."