The late King of Pop's nephew Taj Jackson calls out Rolling Stone magazine for naming the 'Watermelon Sugar' hitmaker 'the new king of pop' in the latest issue of their October/November issue.

AceShowbiz - Michael Jackson's family isn't having it after Harry Styles was crowned as "the new King of Pop" by Rolling Stone magazine. Upon learning of the "Watermelon Sugar" hitmaker's new title, the late King of Pop's nephew Taj Jackson expressed his disappointment on social media.

"There is no new King of Pop. You don't own the title @RollingStone, and you didn't earn it, my uncle did. Decades of dedication and sacrifice," Taj tweeted on Monday, August 22. The 49-year-old added, "The title has been retired. No disrespect to @Harry_Styles, he's mega talented. Give him his own unique title." 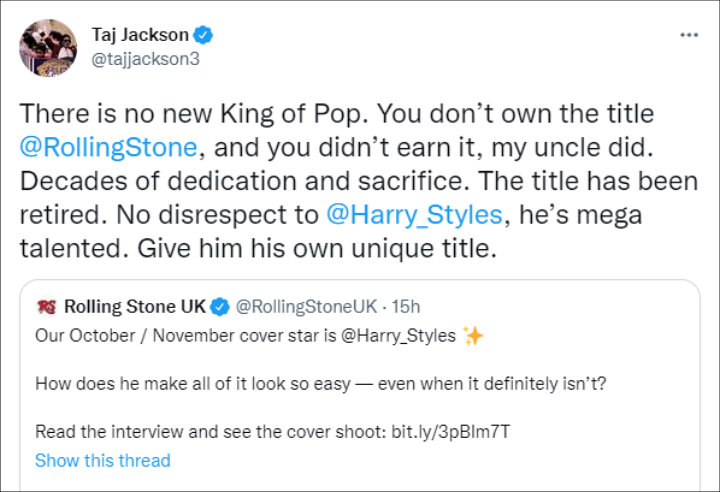 Taj later clarified that he wasn't calling out the former One Direction band member with his tweet. "Notice how they never crown someone 'The new boss' or 'the new king,' " he wrote in a following post along with a tweet from a fan, which read, "This isn't about Harry styles. It's about rolling stone constantly disrespecting Michael Jackson and we're tired."

Many of Taj's followers agreed with his comment. One person penned, "No there's only one. There won't ever be another one. Same with [Elvis Presley]." Taj himself replied to his own comment, as well, doubling down on his feelings about his uncle. "Which is why the title he worked his butt off means something to me," he stated.

A separate follower pointed out, "There is only one King of Pop and no offence intended to Harry Styles but he's not in the same league or universe as Michael Jackson." The said person added, "Harry is like every other pop star….. a Michael Jackson wannabe that will NEVER be anywhere near as good or as talented as the REAL King of Pop."

Taj's social media roast came after Rolling Stone U.K. tweeted out the cover of their October/November issue featuring Harry on Monday. "Our October / November cover star is @Harry_Styles," read the original tweet, alongside star emojis. "How does he make all of it look so easy - even when it definitely isn't? Read the interview and see the cover shoot."

Pictured on the new cover is Harry, rocking a white fur stole and pink sequin shorts while holding a birthday cake with lit candles. The headline reads, "Harry Styles: How the new King of Pop set the music world aflame."

Taj is the eldest child of The Jackson 5's Tito Jackson, who was the controversial MJ's older brother by five years. His mother was Dee Dee Martes, who tragically passed away in a drowning accident in 1994.