In the premiere episode of the new Disney+ series, Jennifer Walters a.k.a. She-Hulk rants about how Steve Rogers might have ended up dying a virgin because he's busy protecting the world.

AceShowbiz - Mark Ruffalo's reputation as the worst at keeping a secret has seemingly translated to his character onscreen. His alter ego Bruce Banner a.k.a. the Hulk has revealed NSFW info about Chris Evans' Steve Rogers a.k.a. Captain America on "She-Hulk: Attorney at Law".

In the premiere episode of the latest Disney+ series, Tatiana Maslany's Jennifer Walters a.k.a. She-Hulk rambles about Steve's virginity. She speculates that he might have ended up dying a virgin because he's busy protecting the world for decades.

In the end-credits scene, Jen once again drunkenly rants in front of her cousin Bruce about how Cap didn't deserve to die a virgin, especially with "that ass." Fed up with her theory, Bruce puts an end to the speculation by disclosing, "Steve Rogers is not a virgin. He lost his virginity to a girl in 1943 on the USO tour."

Jen then reveals that she was faking being drunk to manipulate Bruce into telling her the truth. "Yes! I knew it!" she shouts. She celebrates getting the piece of information as she exclaims, "Captain America fu—!" before the scene abruptly cuts.

Evans, who has hung his Captain America shield in "Avengers: Endgame", caught wind of this. Responding to the NSFW reveal, he let out several face with tears of joy emojis and a zipper mouth face emoji on Twitter with the hashtag "SheHulk".

Ruffalo noticed Evans' tweet and quickly apologized for letting the cat out of the bag. "Sorry bro," he replied to his MCU co-star, before making a hilarious excuse for his slip-up, "It was under extreme duress." 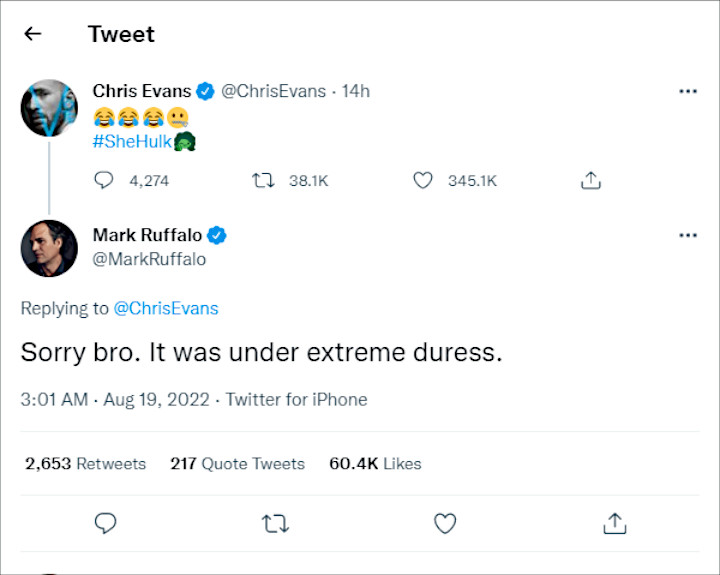 In an interview with EW, Ruffalo admitted that he didn't warn Evans about the NSFW reveal prior to the episode release. "I laughed my ass off," he said. "I'm like, 'Does someone need to talk to Captain America about this?' I haven't. I was afraid he was going to have it cut. Too late now, buddy. The cat's out of the bag."

As for Bruce and Jen's silly conversations like the one in the premiere episode, Ruffalo said that viewers can expect more of this on the show. "That's all the human stuff that we don't get to [usually see]," he said. "What's great about this show is that we get to see them as just human beings and what their lives are and what those histories are."

He continued, "It's really different in that way, and it's funny because we're seeing this single girl in her 30s, and when [head writer] Jessica Gao said, 'I love how horny-forward the show is,' I was like, 'I'm going to use that.' "

Tatiana Maslany Credits Mark Ruffalo for Helping Her for 'She-Hulk: Attorney at Law'