Tristan Thompson Shows Off Eldest Son's Basketball Skills as Khloe Gets Full Custody of Baby No. 2

The NBA star takes to Instagram Story to show 5-year-old Prince Thompson, whom he shares with ex Jordan Craig, dribbling a ball on a 'training day' after welcoming second child with Khloe Kardashian.

AceShowbiz - Tristan Thompson and his son Prince apparently bond on their love of basketball. The NBA star has proudly shown off his eldest child's basketball skills in a video as he joined the 5-year-old on a "training day."

On Saturday, August 13, the Canadian-born athlete took to his Instagram Story to share the clip he took as Prince was playing basketball while guided by a trainer. In the clip, the boy wore a Chicago Bulls jersey bearing his dad's name while dribbling a ball, which was later swapped for another.

Tristan was heard exclaiming, "Let me see your dribbling skill." He went on encouraging his son, "Keep it up! ...Yes, sir!" The 31-year-old, who is currently a free agent, captioned the video, "Starting them early." 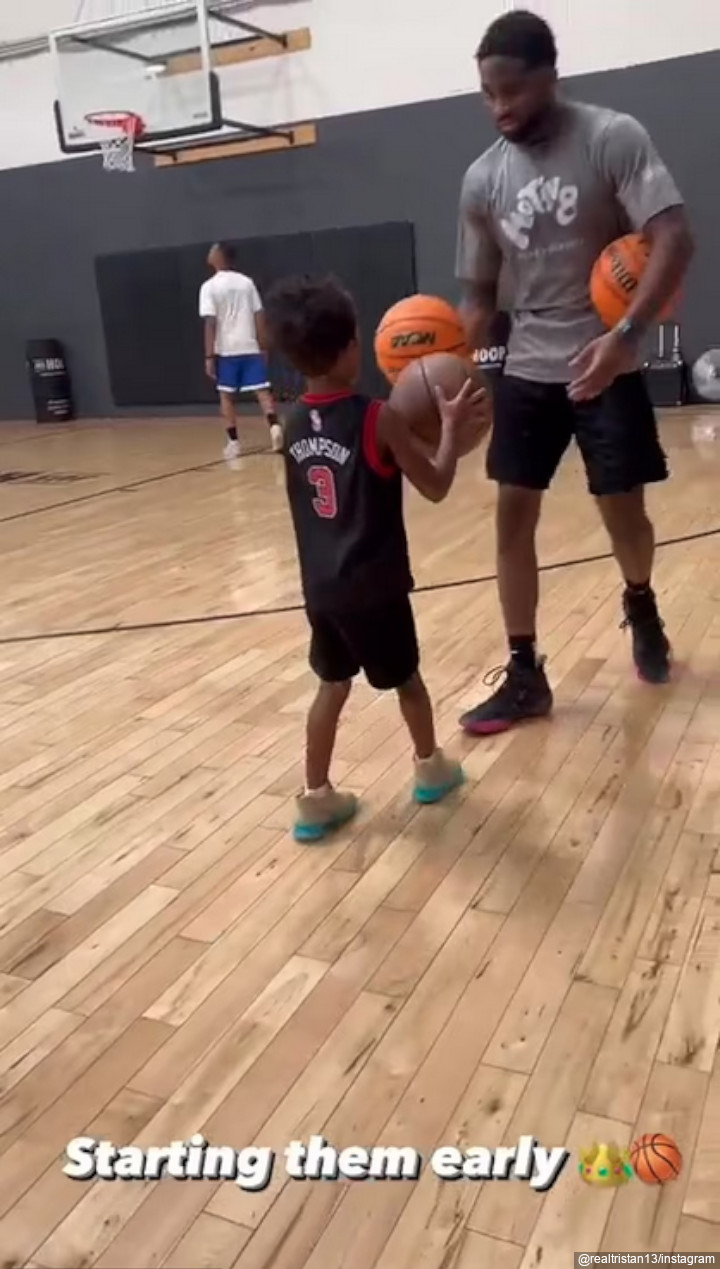 Tristan shares Prince Thompson with his ex Jordan Craig. He is also a father to 4-year-old daughter True Thompson and a newborn son, whom he shares with his other ex Khloe Kardashian. The former couple welcomed their second child together via surrogate, months after it was revealed that he fathered a son named Theo with Maralee Nichols.

Following the birth of Tristan and Khloe's second child, it's reported that they have come to a custody agreement for the newborn baby, whose name has not been announced yet. A source close to the former couple told HollywoodLife.com, "Khloe and Tristan have agreed that Khloe will have sole legal and physical custody of their baby full time.

"Even though Khloe will have full custody of the baby, she's more than happy for Tristan to be present in their child's life as much as he wants," the so-called insider further explained. "Tristan already has such a close bond with True and he loves seeing how excited she is to have become a big sister."

On Tristan being spotted hanging out with his and Khloe's daughter True Thompson on the very same day when his baby No. 2 was being born, the informant explained, "Tristan and Khloe decided it would be better to have Khloe be there in the hospital while the surrogate was giving birth, and to have Tristan be back home looking after True."

The informant continued, "But Tristan has definitely taken an interest in being a very present father to his son and couldn't be happier for the baby."