The 'Top Chef' host's former spouse was stabbed in his neck while he was getting ready to give a lecture at Chautauqua Institution in Chautauqua when he was attacked by a 24-year-old man.

AceShowbiz - Padma Lakshmi has broken her silence after Salman Rushdie was stabbed on stage. Making use of social media, the host of "Top Chef" said that she's worried about her ex-husband.

On Sunday, August 14, the 51-year-old author, activist, model and television host turned to her Twitter account to speak about the horrifying incident. "Relieved @SalmanRushdie is pulling through after Friday's nightmare," she wrote. "Worried and wordless, can finally exhale." She added that she's "now hoping for swift healing." 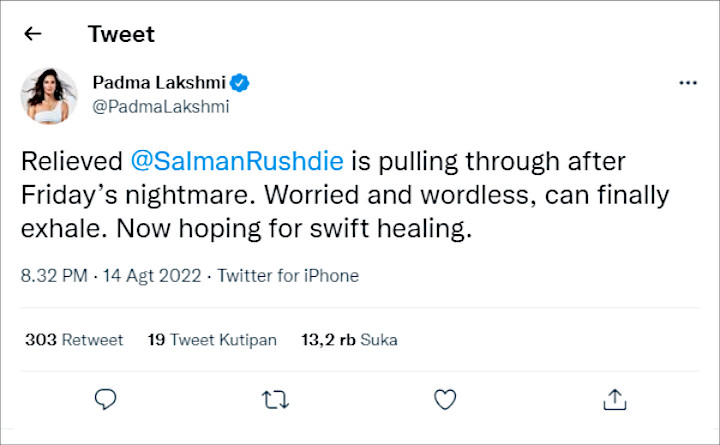 Padma's social media post came after news that her former author husband was taken off a ventilator. On Friday, August 12, the 75-year-old novelist was attacked and stabbed in the neck in New York. He was getting ready to give a lecture at Chautauqua Institution in Chautauqua when a man approached him.

A reporter for The Associated Press who witnessed the scene in rural New York said that Salman fell to the floor and the man was restrained. Authorities said Salman was transported via helicopter to a local hospital. Police also confirmed that the writer underwent surgery after being stabbed roughly a dozen times.

A spokesperson for the Chautauqua County District Attorney said that Salman's injuries include stab wounds to his neck and chest and others to his face and abdomen that pierced his eye and liver.

Later on, Salman's son, Zafar, issued a statement about his father's condition. "Following the attack on Friday, my father remains in critical condition in hospital receiving extensive ongoing medical treatment," he began. "We are extremely relieved that yesterday he was taken off the ventilator and additional oxygen and he was able to say a few words."

Zafar continued, "Though his life-changing injuries are severe, his usual feisty & defiant sense of humor remains intact. We are so grateful to all the audience members who bravely leapt to his (defense) and administered first aid along with the police and doctors who have cared for him and for the outpouring of love and support from around the world." Zafar concluded his statement by asking for patience and privacy for his family.

NBC News reported that the suspect, who was identified as Hadi Matar of Fairview, New Jersey, has been charged with second-degree attempted murder as well as second-degree assault for an injury to the event's moderator.

Chautauqua County District Attorney Jason Schmidt stated that the suspect is being held without bail at the Chautauqua County Jail. An attorney for 24-year-old Hadi entered a not guilty plea on his behalf.