The wife of Alec Baldwin makes use of her social media platform to shut down rumors that she wears a fake baby bump after many noticed her pregnant belly looks perfectly round.

AceShowbiz - Hilaria Baldwin is making it clear that her baby bump is not fake. The wife of Alec Baldwin has slammed "psycho conspiracy theorists" who claimed that she wore a fake baby bump.

Making use of her Instagram page on Thursday, August 11, the 38-year-old former yoga instructor posted a closer look of her upcoming bundle of joy with a sonogram photo. "She's getting very smushed in there, but baby update is all is well. Grateful for this little soul," she captioned the post.

A few minutes earlier, Hilaria took to Instagram Story to share some thoughts on "harassment," "bullying" and the "cruel culture of tear downs." The pregnant mom, who is currently expecting her seventh child with her husband Alec, penned, "When I get really sad and down, the trauma of being bullied begins to consume me, I think about how other people feel this way too."

"Some right now and some at other times... it gives me a wave of courage to put one foot in front of the next to make it thru to a place where I can figure it out," Hilaria added. "Write down the path on the map with others, so we can light the way for more to find a happy life. Regardless of harassment, bullying, and cruel culture of tear downs."

Hilaria further stated, "It is in those moments of sadness that I find it easier to fight for others," before asking, "Isn't it funny how for some, its harder to do this for ourselves?" She then said that she hopes she "will find toe courage to also rally for [herself] in a consistent way, giving [her] soul the courage that [she is] here to love unconditionally from the inside." 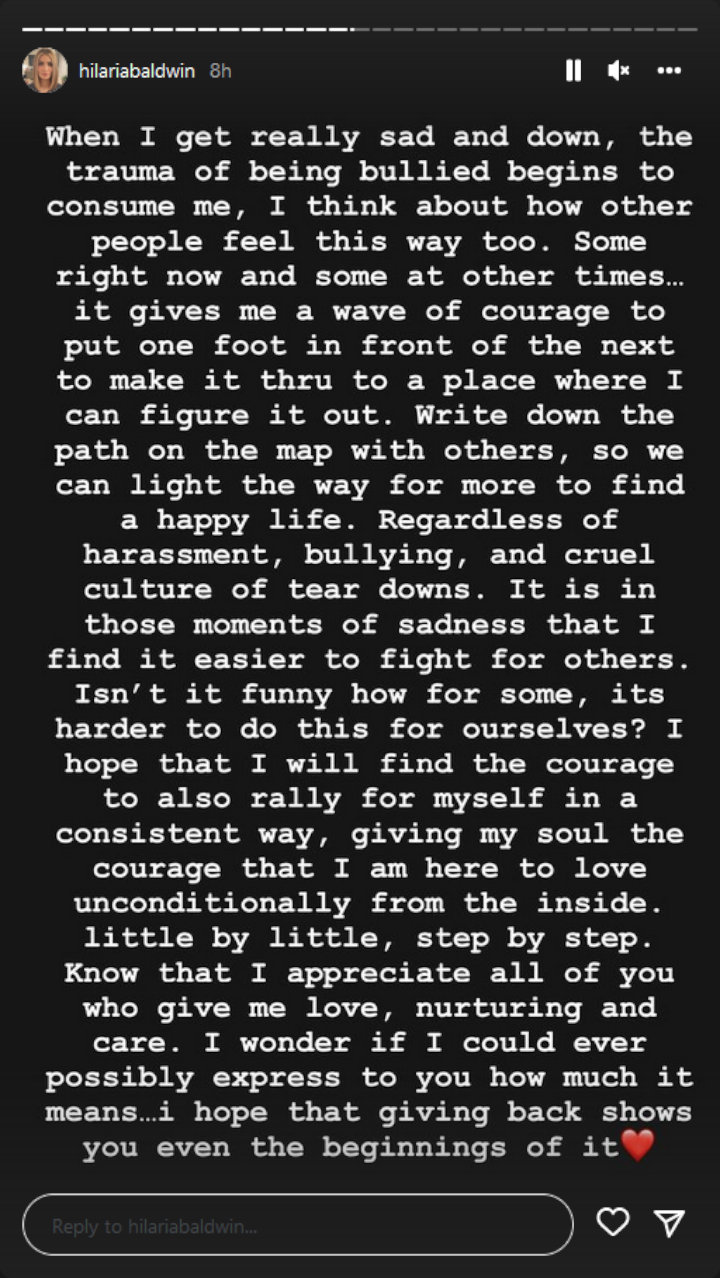 Hilaria Baldwin issued a statement after being accused of wearing a fake baby bump.

Hilaria's posts came after she was accused of wearing a fake baby bump as it looks perfectly round. Poking fun at what she called "psycho conspiracy theorist," she uploaded a new picture showing her growing baby bump on Wednesday, August 10.

"My Friends made a good point about my belly... it kind of looks fake…," she wrote over the photo. "Like I ate a ball. I guess the psycho conspiracy theorists online with way too much time of their hands have somewhat of a point here. Now you guys can go share links and theories as to what kind of ball it was that I ate... hop you can come up with options that taste good... Ps-- Chocolate is my fav…"

As if that is not enough, Hilaria uploaded a video of her unborn baby kicking her tummy. Over the clip, she wrote, "As an analytic Capricorn, I have to point out a glitch in the chocolate ball theory: this ball moves."

Hilaria went public with her seventh pregnancy in March. She and Alec previously welcomed Carmen, 8, Rafael, 7, Leonardo, 5, Romeo, 4, Eduardo and Lucia, both 1, and the 64-year-old actor is also the father of daughter Ireland, 26, from his marriage to Kim Basinger.

Hilaria Baldwin Kicks Off 2022 With Hopeful New Year Post: It's Going to Be 'Flawless'

Hilaria Baldwin's 'Mom Brain' Podcast Appears to Have Been Canceled