Meanwhile, the dancer claims in a new interview that the 'Full House' star 'didn't share all the details' of their phone conversation which took place after their recent feud made headlines.

AceShowbiz - Candace Cameron Bure's daughter Natasha Bure continued defending her mom after being dissed by JoJo Siwa. Making use of her Instagram Story, the 23-year-old responded to JoJo recalling her "rough experience" meeting the "Fuller House" actress whom she dubbed the "rudest celebrity."

"Respectfully, someone saying no to taking a photo with you is not a 'rough experience,' " Natasha wrote in a now-deleted Story on Thursday, July 28. "This generation is so sensitive and has zero backbone. Grow up. There are bigger issues in the world than this." 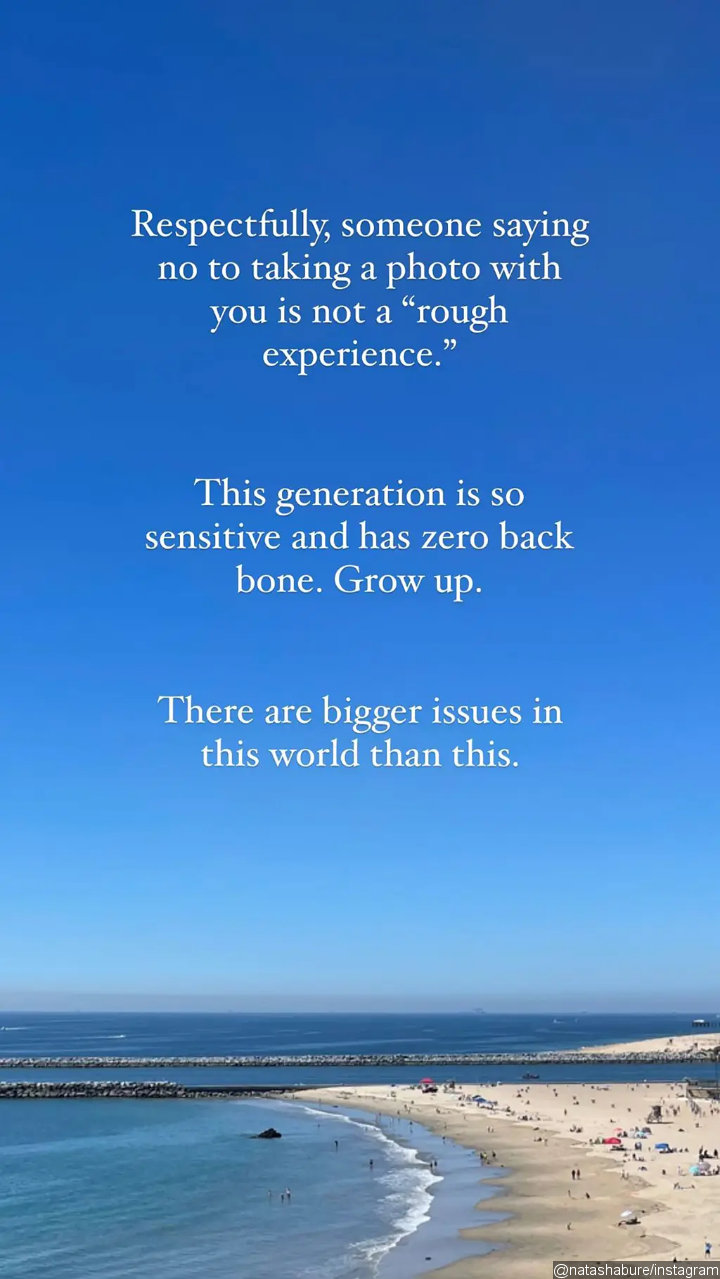 "For someone to say that they don't want to take a photo with you or that it's a bad time because they're working is not a 'rough experience,' " the "Home Sweet Home" actress, who called her mom "the most kind, soft-spoken, apologetic, class act" out there, continued. "There are people who are dying in other countries, there are children who are starving. Those people are having a rough experience."

Candace also took to her page to share a lesson that can be learned from the drama. The "Full House" star shared with her followers the Bible verse Philippians 2:3, which reads, "Do nothing out of selfish ambition or conceit, but in humility. Consider others more important than yourselves."

Meanwhile, JoJo claimed in a new interview that Candace "didn't share all the details of the meeting" during their phone conversation which took place after their recent feud made headlines. "We did speak on the phone. She shared that in her [Instagram video]," the 19-year-old said on Thursday to Page Six.

The "Dance Moms" alum went on to elaborate, "It was at the afterparty that she didn't wanna take a picture with me, and I was OK with that. But then I turned around, and when I looked back, she was taking pictures with other kids."

JoJo admitted that it made her "really, really upset," calling it "one of those memories" that's just always "stuck with" her. She explained, "When you're little and somebody says something to you, and you just never forget it as long as you live - I think we've all had that moment - and I feel like this was that moment for me."

Despite that, JoJo acknowledged that "it was a positive call." The "So You Think You Can Dance" judge continued, "We had about a 10-minute conversation, and it was sweet," she said. "She apologized, and we talked. It was cool. It was nice."

The feud between JoJo and Candace started after the former named Candace the "rudest celebrity" she's ever met in a TikTok video. While the revelation caused media frenzy, JoJo doesn't seem to regret it. "I was being honest, and that's something that I've always done and will always do," she said on Thursday.