While debunking the rumors, the Tesla founder calls out Wall Street Journal, who first reported the alleged affair, and says that he had 'lost count' of the amount of 'bs hit articles' the outlet had written about him.

AceShowbiz - Elon Musk is setting the record straight. The 51-year-old SpaceX and Tesla founder has insisted that he did not have an affair with Nicole Shanahan, the now-estranged wife of Sergey Brin.

The business magnate was reported by the Wall Street Journal to have had a "brief affair" with the now-estranged wife of his friend and Google co-founder Sergey back in December but took to social media in the early hours of Monday morning, July 25 to insist that the rumours are false and joked that he "hasn't even had sex in ages."

He tweeted, "This is total bs. Sergey and I are friends and were at a party together last night! I've only seen Nicole twice in three years, both times with many other people around. Nothing romantic. Haven't even had sex in ages (sigh)."

Elon, who split from pop singer Grimes in September 2021 but welcomed now-seven-month-old daughter Exa Dark with her when the affair was said to have happened, went on to slam the outlet as "embarrassing" and said he had "lost count" of the amount of "bs hit articles" the Wall Street Journal had written about him and his company.

In a follow-up tweet, he added, "WSJ has run so many bs hit pieces on me and Tesla I've lost count! It's embarrassing for them, frankly." He went on saying, "They once wrote an article saying FBI was about to arrest me, so I called FBI to ask what's up and they said WSJ article was total bs. Just more shortseller fud." 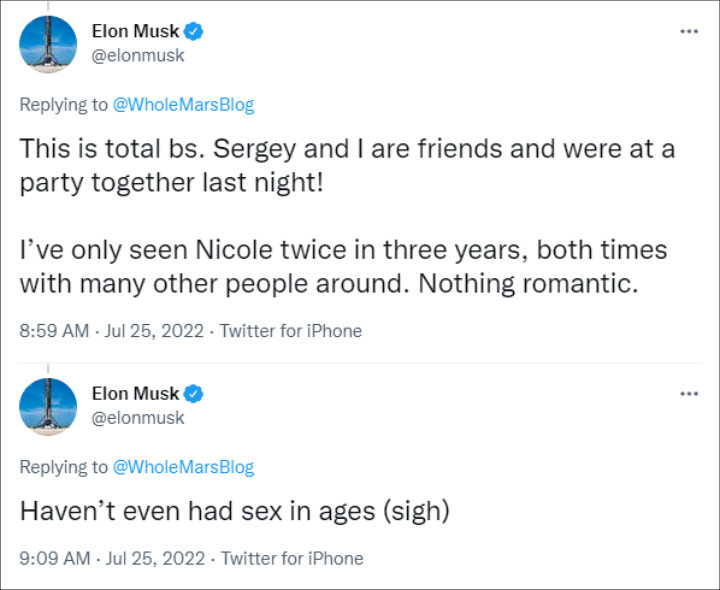 Elon Musk responded after it's reported that he had a 'brief affair' with Sergey Brin's wife Nicole Shanahan.

His statement came just hours after sources said to be close to Elon told the newspaper about the alleged affair explained that Elon, who was close friends with Sergey for a number of years and is thought to have borrowed around $500,000 from him during the 2008 financial crisis, and his fellow multi-billionaire were allegedly no longer on speaking terms and Sergey had intended to sell his personal investments in Elon's companies.

The WSJ reported, "In recent months, there has been growing tension between the two men and their teams, according to the people familiar with the matter. Mr. Brin has ordered his financial advisers to sell his personal investments in Mr. Musk's companies, some of those people said. It couldn't be learned how large those investments are, or whether there have been any sales."

Back in January 2022, Sergey, who was also previously married to Anne Wojcicki and has Benji, 13, and 11-year-old Chloe with her while Elon has a total of 10 children from various relationships, cited "irreconcilable differences" as the reason for the divorce and noted that December 15, 2021 was their official date of separation.