The NBA star shares a quote about 'growth' after his ex Khloe Kardashian says people don't get to see his 'good side' during the 'Not Skinny But Not Fat' podcast interview.

AceShowbiz - Tristan Thompson may have something to say about his personal life and relationship with Khloe Kardashian. Taking to social media, the NBA star shared a cryptic post about leaving people behind and mourning his "former life."

On Wednesday, May 25, the 31-year-old athlete reposted the wise words on his Instagram Story. The quote read, "Growth requires us to leave something behind." It continued, "It can be habits, careers, beliefs, even people. Make space for grief in the process of growth. You have to mourn your former life to make room for a newer you." 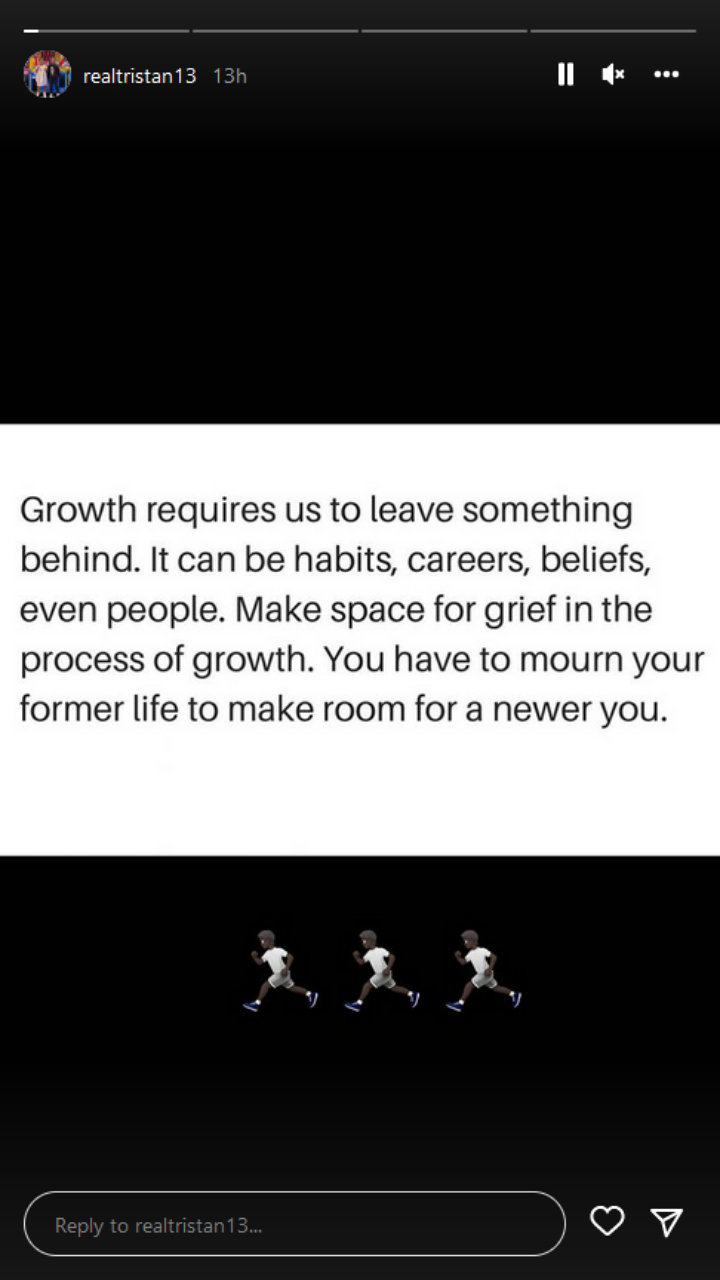 Tristan Thompson shared a cryptic quote after Khloe Kardshian said that he has 'so many good sides.'

Tristan's social media post came shortly after Khloe weighed in on their relationship in the Tuesday, May 24 episode of "Not Skinny But Not Fat" podcast. Speaking to host Amanda Hirsch, "The Kardashians" star noted, "It's sad because, like, there's so many good sides to him as well, but no one gets to see those 'cause they're all overshadowed by, like, the personal stuff that's going on between him and I."

Khloe went on to stress that Tristan is "a good person" but "not a good partner" for her. She continued, "I want everyone to still have, like, a fair shot at just being happy and having a good life. So I don't ever encourage anyone to just, like, jump on that bandwagon, but I also think people can have their own feelings and do what they want, but he's always going to be in my life because of True, and he's a great dad, and that's all I really need to focus on."

In the May 5 episode of "The Kardashians", which was filmed before his paternity scandal, Khloe stated that she's "optimistic" about her future with Tristan. Aside from explaining that she had "a lot of hope and faith and optimism" about their "future together," the 37-year-old reality star said that they were in a "really good place."

"We're good. We're actually in a really good place," Khloe gushed at the time. The Good American co-founder added, "We just got back together. He's been going to therapy a lot. There's just been a lot of effort on his part."

Not stopping there, Khloe also praised Tristan's parenting skills. She raved, "He's a great father. True has her routines and she loves having them with both of her parents. It's so great to see that joy on her face. When we broke up, I learned how well he and I got along, and what good friends we are, and what good partners we are."

In December 2021, it was revealed that Tristan welcomed a son named Theo with Maralee Nichols. A month later, he apologized to Khloe for the "heartache" and "humiliation" he had caused.

"Today, paternity test results reveal that I fathered a child with Maralee Nichols. I take full responsibility for my actions. Now that paternity has been established I look forward to amicably raising our son," Tristan penned. He added, "I sincerely apologize to everyone I've hurt or disappointed throughout this ordeal both publicly and privately. Khloe, you don't deserve this. You don't deserve the heartache and humiliation I have caused you. You don't deserve the way I have treated you over the years."