To commemorate her babies turning two months old, the 'Love and Hip Hop: Miami' star share close-up pictures of Sumajestad and Sualteza for the first time ever.

AceShowbiz - Amara La Negra has decided to unveil more about her bundles of joy. A couple of months after giving birth to twins Sumajestad Royalty and Sualteza Empress, the "Love & Hip Hop: Miami" star chose to share with the world a close-up look at her babies' faces.

On Tuesday, May 24, the "Ayy" songstress made use of her Instagram account to commemorate her babies turning two months old. Sharing multiple posts of Sumajestad and Sualteza, she began by first letting out a picture of her twins sleeping as they hugged each other. They were seen wrapped in a soft pink fabric and had a pink headband on their heads. Along with it, she wrote a caption that simply read, "I Present to the World My Daughters."

Afterwards, Amara went on to post another picture of her newborns. This time, the babies were seen wearing a matching little pink bathrobe along with matching headbands. One of her babies was holding a tiny replica of a starbucks cup. To accompany the post, she wrote, "Do you think We look like Our Daddy @allan600 or our Mommy @amaralanegraaln?"

The "What a Bam Bam" singer did not stop there. She finished off the celebratory post by uploading a close-up photo of her babies. In the caption, she wrote, "@lasroyaltwins Today we are 2 Months."

In the wake of her sharing, fans were quick to flood her comment sections with congratulatory messages. One complimented the babies by writing, "Omg they are precious, beautiful princesses." A second one gushed, "Omg they r just gorgeous." A third one remarked, "They are Beautiful!!! Thank you for sharing these beauties with us!! May your family continuously be and remain blessed!!!" 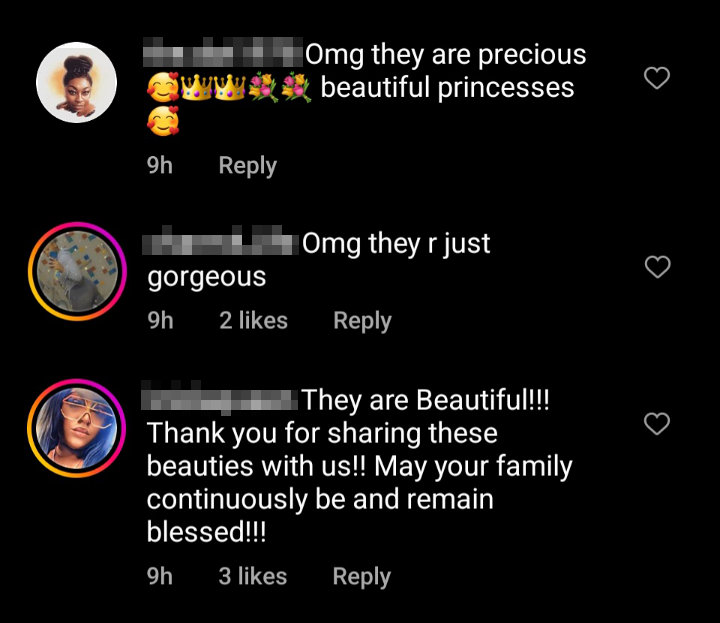 Amara gave birth to Sumajestad and Sualteza on March 23. The 31-year-old singer came forward with the name of her twins in April. Via Instagram, she posted a picture of her twins' tiny feet in a pink onesie. In its caption, she wrote, "My Daughters. Sumajestad Royalty De Los Santos, Sualteza Empress De Los Santos."

Amara La Negra Recalls 'Crying for Days' After Having Miscarriage