In the upcoming 'Barbie' film, Issa Rae and Hari Nef reportedly will join the 'Harley Quinn: Birds of Prey' actress to portray different incarnations of the Mattel dolls.

AceShowbiz - Margot Robbie "is not the only Barbie" in her new movie. The "Birds of Prey: And the Fantabulous Emancipation of One Harley Quinn" actress reportedly will be joined with other actresses in the upcoming movie "Barbie".

The 31-year-old actress has the lead role in the upcoming "Barbie" film, opposite Ryan Gosling as Ken, but a host of other stars will also portray different incantations of the Mattel dolls in the live-action project. New York Times reporter Kyle Buchanan tweeted, "I am hearing incredible BARBIE goss at Cannes."

"For one, I'm hearing that Ryan Gosling is not the only Ken in the BARBIE film. Simu Liu and Ncuti Gatwa also play Kens," Kyle reported. "And, by the same token, Margot Robbie is not the film's only Barbie. Issa Rae and Hari Nef play different Barbies…" 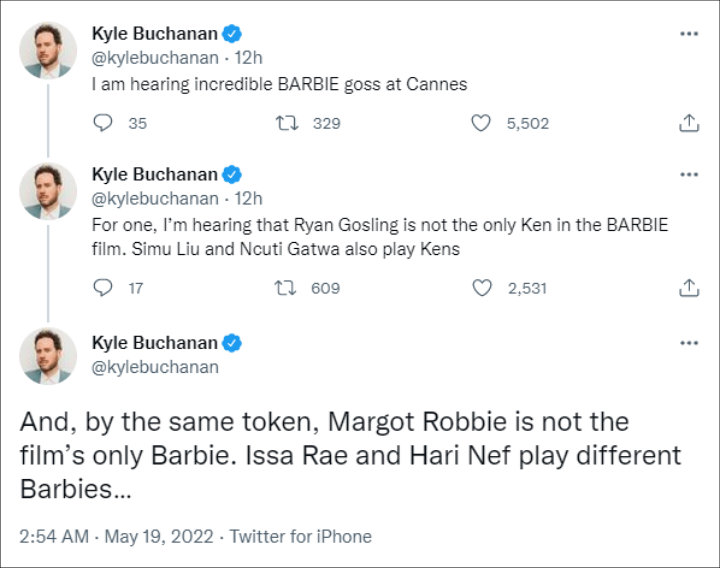 Kyle Buchanan reported that Margot Robbie will be joined with Issa Rae and Hari Nef in 'Barbie'.
See also...

It was recently announced by Warner Bros. that they will release the film - which also stars Will Ferrell and America Ferrera, in summer 2023. Greta Gerwig has directed the flick and has penned the script with Noah Baumbach. Production has already started on the movie.

Plot details are being kept under wraps, but insiders have suggested that there is a meta aspect to the story. Will is said to be playing the CEO of a toy company that may or may not be Mattel.

As well as acting, Margot is producing the project via her LuckyChap banner with her husband Tom Ackerley. Mattel Films' Robbie Brenner and the "Paddington" producer David Heyman are also involved in the production.

Margot has long been attached to play Barbie on the big screen and promised that the movie will be very different to what people are expecting. She said, "Something like Barbie where the IP, the name itself, people immediately have an idea of, 'Oh Margot is playing Barbie, I know what that is', but our goal is to be like, 'Whatever you're thinking, we're going to give you something totally different, the thing you didn't know you wanted.'"

Margot is hoping to provoke "thoughtful conversation" with the film. The "Once Upon a Time in Hollywood" star said, "Now, can we truly honor the IP and the fan base and also surprise people? Because if we can do all that and provoke a thoughtful conversation, then we're really firing on all cylinders."

Karrueche Tran and Quavo Vacationing Together in Jamaica