Coming to fashion's biggest night out, the 'Carnival Row' star paints her topless upper body gold, but does not make any attempt to hide her chronic skin condition.

AceShowbiz - Cara Delevingne becomes the talk of the town with her bold look at the 2022 Met Gala. Going risque for the annual fundraising event, the English model did not only show off nearly all of her upper body on the red carpet, but also put her psoriasis under the spotlight.

On Monday, May 2, the "Carnival Row" star turned heads as she wore red Dior suit pants with nothing on top but gold body paint and pasties. Red, flaky patches on some area of her topless torso, however, were left unpainted. Upon arriving at the gala, she was wearing the red Dior suit jacket, but took it off on the carpet and hung it over her shoulder.

In an interview with Variety on the carpet, Cara stated that she wanted to show more skin if she could. "I did a reveal of my boobs, but not the nipple since I still have to hide those, apparently," the 29-year-old model told the magazine.

The actress' boldness in exposing her psoriasis received a lot of positive comments. One praised her in a tweet that read, "Seeing @Caradelevingne embrace her psoriasis at the met gala literally makes me so emotional. Bad b****es really do have psoriasis." Another expressed admiration by writing, "@Caradelevingne showing people with Psoriasis that there is nothing to be ashamed of." 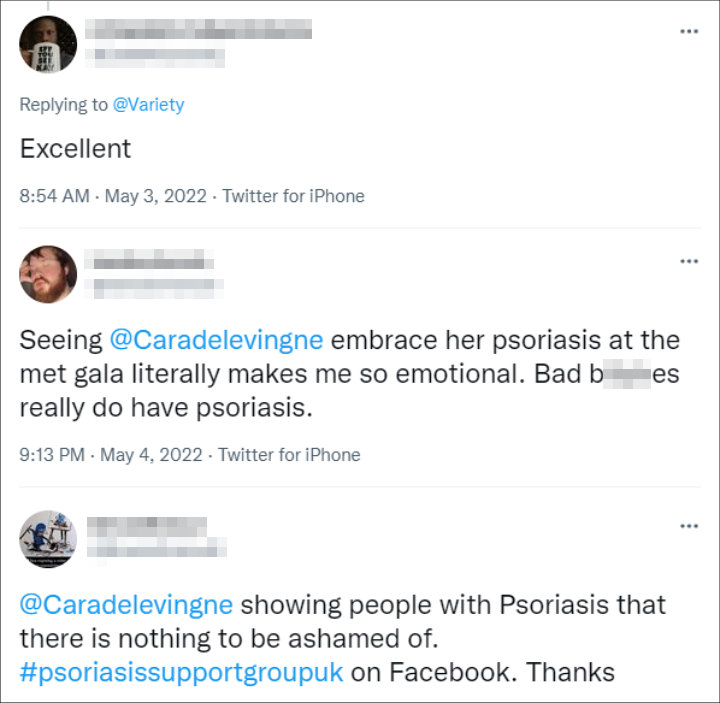 Fans praised Cara for her boldness.

Cara is one of many celebrities who are open about suffering from psoriasis. In 2015, the "Suicide Squad" actress opened up to The Times that the stress from constantly walking on runways made her skin condition flared up. "I am not doing fashion work anymore, after having, like, psoriasis and all that stuff," she pointed out.

The younger sister of Poppy Delevingne did make a return to modeling world. However, she noticed a number of people were visibly disgusted by her skin condition. "People would put on gloves and not want to touch me because they thought it was, like, leprosy or something," she told the outlet.

Psoriasis is a chronic, inflammatory skin disease. It causes red and itchy patches to appear on the skin. Affected area are mostly on knees, elbows, or scalp. It comes and goes in cycles that usually last for weeks or months. The American Academy of Dermatology Association claimed that it affects almost 7.5 million Americans. Though it has no cure, it could be controlled with treatments.