The 'Dancing with the Devil' singer first changed their pronouns into they/them in May last year with a lengthy note in which they urged people to 'keep living in your truths.'

AceShowbiz - Demi Lovato permanently marked their sexuality journey on their body. The "Dancing with the Devil" singer has shown off their new tattoos embracing "duality" after they adjusted their pronouns.

On Tuesday, May 3, the 29-year-old singer/songwriter offered some photos of their new body art on Instagram Story. They flaunted the word "love" on one shoulder and "fear" on the other. "Duality," they simply captioned the picture. They also added a black heart emoji and tagged celebrity tattoo artist, Dr. Woo. 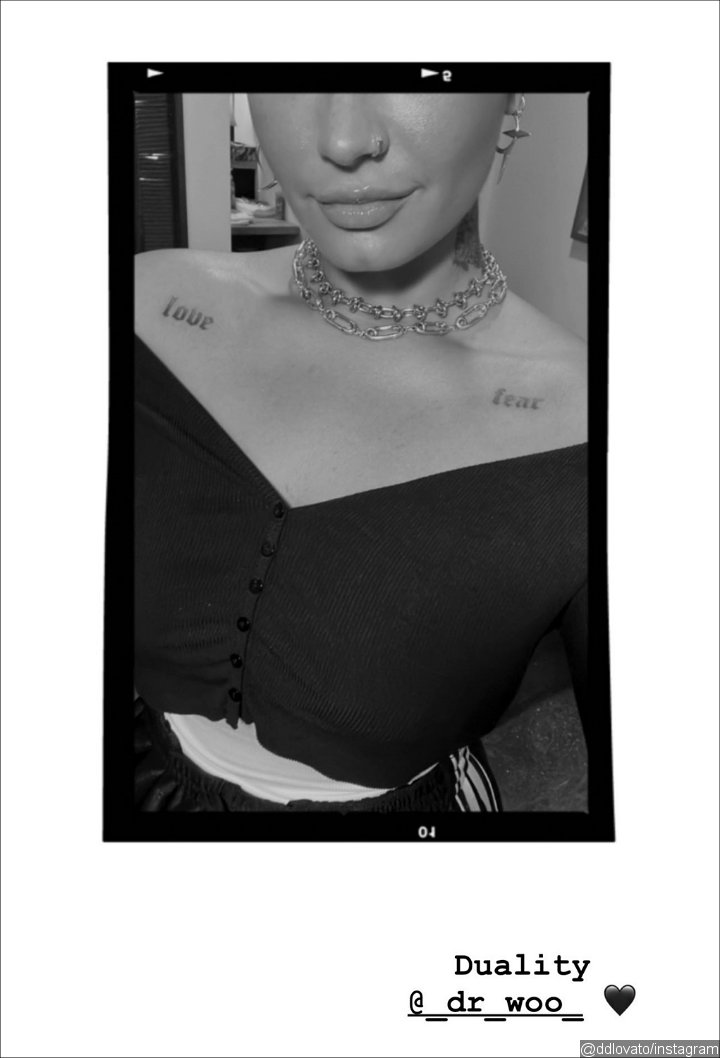 Demi Lovato showed off new tattoos after updating their pronouns.

Earlier that day, Demi was spotted updating their pronouns on their Instagram bio. The "Cool for the Summer" singer added "she/her" to the pronouns they previously used, which are "they/them."

Demi announced that they changed their pronouns into they/them on May 19. At the time, they took to their Instagram account to share a clip from the first episode of their "4D With Demi Lovato" podcast. In the caption, they wrote a message that read, "Today is a day I'm so happy to share more of my life with you all - I am proud to let you know that I identify as non-binary and will officially be changing my pronouns to they/them moving forward [love]."

Elsewhere in the lengthy note, the ex-fiancee of Max Ehrich urged people to keep living in their truths. They sweetly penned, "Please keep living in your truths and know I am sending so much love your way xox."

A few days later, Demi candidly claimed that they felt patriarchy had been holding them back from accepting their true identity. "The patriarchy, they run the industry, they are at the center of everything," they told Jane Fonda in the May 28, 2021 episode of the "Fire Drill Fridays". They later shared that they realized they once tried to make themselves "smaller for the patriarchy," before adding, "When I realized that, I thought, 'What are the ways that the patriarchy has been holding me back?' "

Demi also confessed that "after years of living [their] life for other people," they think all they could encourage people to do is "to find more compassion and to have more empathy for others." Elaborating further, the "Camp Rock" star told the host, "If you're having a hard time finding that towards others, go within yourself, find it within yourself so you can find it for others because that's what will bring us together is, that unity."