Following reports of the 'Justice League' star's legal issues, DC fans demand that the 'Fantastic Beasts' actor is replaced by Gustin, who portrays the Scarlet Speedster on The CW's series.

AceShowbiz - Ezra Miller faces the threat of losing one of their biggest roles to date. DC fans have called for the actor to be replaced by another star for upcoming "The Flash" movie following their recent legal issues that occurred during their stay in Hawaii.

After reports broke that Miller was arrested for disorderly conduct and harassment and slapped with a restraining order by a couple in Hawaii, fans have been campaigning on social media to have the "Justice League" star be replaced by none other than Grant Gustin. They wrote things like, "Probably a good time to mention this, Grant Gustin would've been a much better DCEU Flash" and "Ezra Miller should not play The Flash again or act at all until they get the help they clearly need" on Twitter.

"Warner Bros needs to find a new Flash and fast because I'm genuinely concerned for Ezra Miller's state of mind," a third fan tweeted. Another fan of Gustin argued, "Give [the role] to grant gustin please god that man is so good he deserves better than a show with a $5 budget."

"Enough is enough! They should recast Ezra Miller with 'Grant Gustin' #GrantIsTheFlash#DC," a fifth user wrote, while another claimed Gustin is an "obvious" replacement. "Grant Gustin is an obvious choice to replace Ezra Miller," the said user tweeted, adding, "The Flash tv show has had 8 seasons. Finish it. The stories are tired. Give him a chance at the movie."

Gustin is indeed no stranger to The Flash, having played the Scarlet Speedster on The CW's "The Flash" series since the first season, which premiered in 2014. The show is currently in its eighth season and has been picked up for a ninth season by the network.

As for Miller, they first starred as the superhero in "Batman v Superman: Dawn of Justice" (2016) before reprising the role in 2017's "Justice League" and "Zack Snyder's Justice League" (2021). He has wrapped up the filming of "The Flash" solo movie, which is scheduled for a June 23, 2023 release, but it's recently reported that WB has put his future projects, including his possible appearances in DCEU, on pause following the public meltdown.

According to Rolling Stone's knowledgeable source, Warner Bros. and DC executives held an emergency meeting immediately after news spread of the actor's legal troubles. At the March 30 meeting, they allegedly reached a consensus "to hit pause on any future projects involving Miller including possible appearances in the DC Extended Universe."

A rep for Miller has not spoken up on the actor's legal issues, while WB has not released an official statement on its decision regarding the actor's future projects. The 29-year-old also skipped the premiere of their movie "Fantastic Beasts: The Crimes of Grindelwald", also produced by WB, on March 29 in London.

This Is Why Recasting Ezra Miller for 'The Flash' Is Not an Option for Warner Bros. 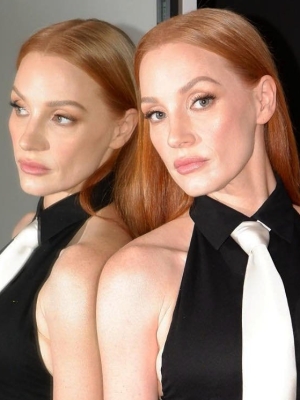