Nick Lachey Apologizes for 'Overreacting' at Paparazzi But Denies Getting Violent

In his statement, the member of 98 Degrees insists that the photographer 'harassed' him, his wife Vanessa Lachey and another female friend as they walked back to their hotel.

AceShowbiz - Nick Lachey has broken his silence after he reportedly got violent toward the paparazzi. Taking to social media, the "What's Left of Me" crooner issued an apology note, pointing out that he was "overreacting" while denying that he assaulted the female photographer.

Just hours after footage of him seemingly getting in an altercation with the photographer, the "Love Is Blind" co-host tweeted, "Last night, after enjoying a great dinner with my wife and our dear friend, the paparazzi harassed us as we walked back to our hotel." He went on to admit, "I clearly overreacted."

"I've been in this game long enough to know that their antics are sadly part of the deal. Stupid of me. Done," Nick continued. The 48-year-old further insisted that he didn't physically attack the photographer.

Nick penned in a separate Twitter post, "However, for TMZ or anyone else to say that I was violent or that I 'got physical' with someone is reckless and absolutely false." The 98 Degrees member noted, "Once again, TMZ likes to crate [sic] their own clickbait narrative. Life's too short, we move on." 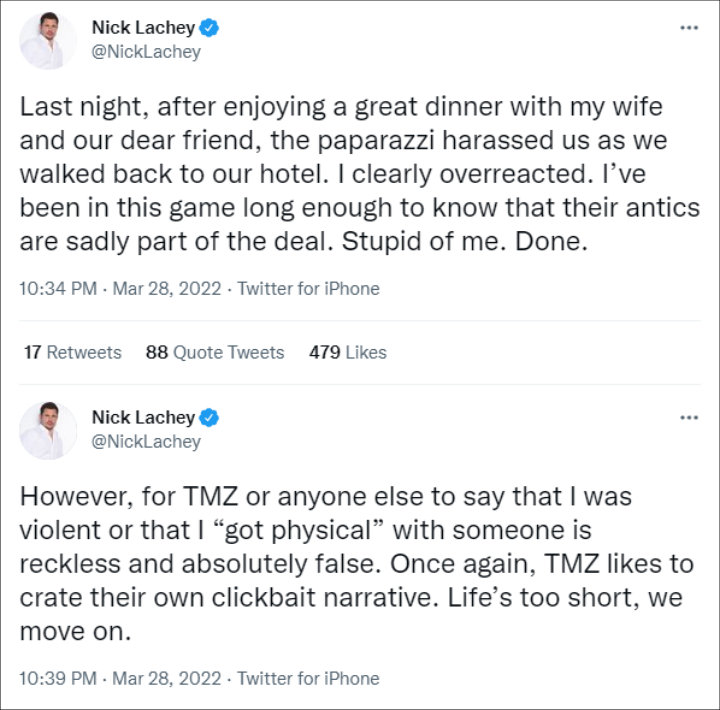 In the video posted by TMZ, Nick appeared to reach inside a photographer's car and try to snatch a phone from her hands after he saw her trying to take a photo of him from her vehicle. The "This I Swear" crooner then seemingly punched her window and called her a "p***y motherf**ker." In the meantime, his wife Vanessa Lachey a.k.a. Vanessa Minnillo could be heard yelling for her to open the car door.

Nick was also yelling and sticking his middle finger up to the photographer as he walked back to a hotel with his wife and another female friend. The photographer, in the meantime, claimed to the outlet that she could smell alcohol on his breath, which she believed was a possible factor in his erratic behavior.