When making his return to his social media platforms, the 'Industry Baby' hitmaker reveals that he is currently working on his new songs as well as his upcoming second album.

AceShowbiz - Lil Nas X has finally returned to social media after taking a three-month hiatus. Taking to his platforms, the "Industry Baby" hitmaker reveales that he has new music with NBA YoungBoy (YoungBoy Never Broke Again) and Saucy Santana.

Making use of his Instagram Story on Wednesday, March 16, the "MONTERO (Call Me By Your Name)" rapper unveiled that he has upcoming tracks featuring YoungBoy and Santana. "Which one y'all want first?" he asked his fans along with screenshots of the songs in his music library. "Late to the Party" is the title of his collaboration with YoungBoy, while "Down Souf H**s" is the name of his track with Santana. 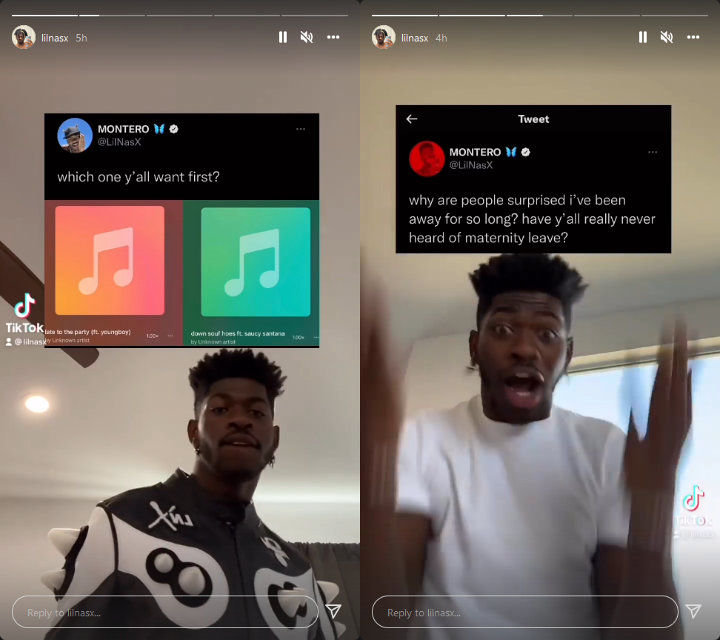 Taking to Twitter, Nas X also launched a snippet of another new song. "Who y'all think i should get on this?" he captioned a nearly 2-minute clip of the track. In a separate post, he shared that he "wrote this song in a really depressing time of [his] life after losing a childhood bestfriend."

After one hater criticized his song, calling it "horrible," Nas X fired back, "This song is about my friend who passed away at 17. Take your trolling somewhere else!" The "Old Town Road" spitter added in a separate tweet, "I see some people not feeling it. Just wanna say it's not mixed and mastered yet."

Nas X's new tracks announcement came minutes after he made his first post on Twitter and Instagram. "Why are people surprised i've been away for so long? Have y'all really never heard of maternity leave?" he jokingly asked on Twitter, referring to the long-running joke of him giving birth to his debut album, "MONTERO", last September.

The hip-hop star, who is set to perform at the 2022 Grammy Awards alongside Billie Eilish, BTS (Bangtan Boys) and Olivia Rodrigo, later tweeted, "I'm so happy i'm back on the internet. I missed me so much." He then shared, "Ok i'll be honest i haven't been posting online because i gotta bbl [Brazilian butt lift]."

Nas X also hinted that a new album is coming soon. "New album close to finished," the "That's What I Want" hitmaker penned, before adding that he hasn't picked any name for his upcoming second studio album. 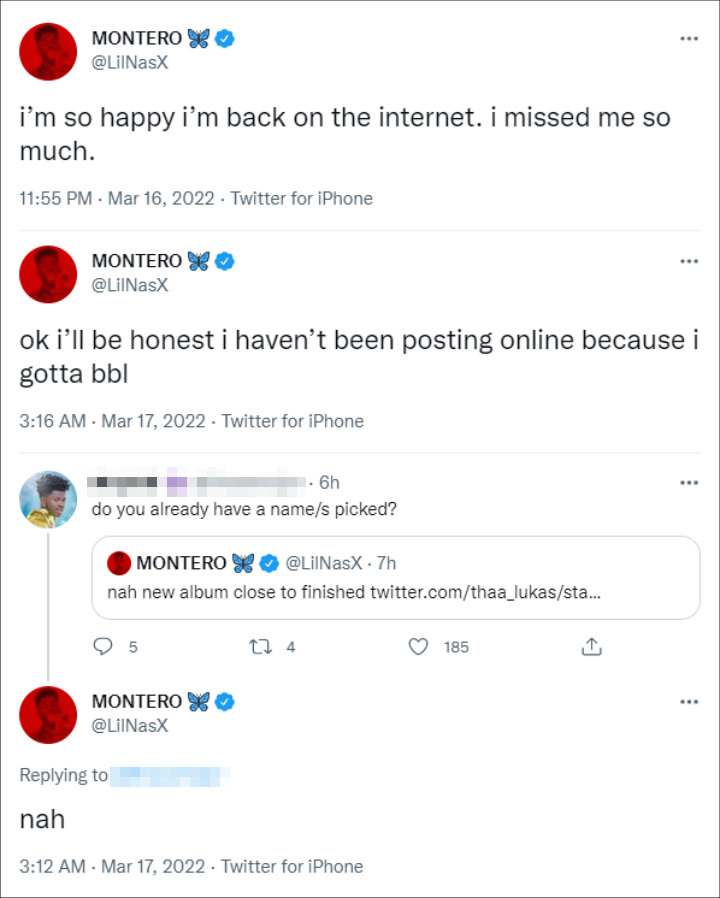 Lil Nas X added some details of his 'maternity leave' and new album.

Nas X's fans had been concerned over the past few months after his sudden departure from social media platforms after he revealed that he contracted COVID-19 last December. "Now that I'm sure I won't die from covid, I will now begin making mildly funny jokes about having it," he wrote before jokingly using celebrities' names to refer to COVID variants. "I'm not sure whether I've had the Omarion or Alicia Keys variant of covid but this hasn't been a fun journey."