While most people condemn Russia for attacking Ukraine, the conservative commentator takes to Twitter to show support to Russia as she notes that Russians are facing discrimination.

AceShowbiz - Candace Owens is back with another controversial take on things. While most people condemned Russia for attacking Ukraine, the conservative commentator showed support to Russia as she noted that Russians are facing discrimination.

"Absolutely appalling the way Russians are being treated in America and abroad. That our leaders and government institutions are allowing for-and at times calling for this discrimination following their global 'black lives matter' hysteria is quite telling," Candace wrote on Twitter. She went on to insist, "Russian Lives Matter."

She doubled down on her statement in a series of tweets on Monday, March 14. "For those of you sitting on the edge or your seats-I stand by every word of my tweet pertaining to the treatment of Russian citizens abroad," she claimed. "Those calling for russian students, opera singers, etc to be banned are the kind of scum who would have demanded the Japanese internment."

In another tweet, Candace added, "I do not care if you are Russian, Chinese, or otherwise abroad-no citizen should face discrimination because of the actions of their government. NONE of our world leaders have clean hands. May I never be made to stand trial for the plenty sins of the American government."

Unsurprisingly, many came to Candace over the statement. Some even accused her of spreading Russian propaganda. People also called her out for speaking badly about Black Lives Matter but showing major support to the Russians. 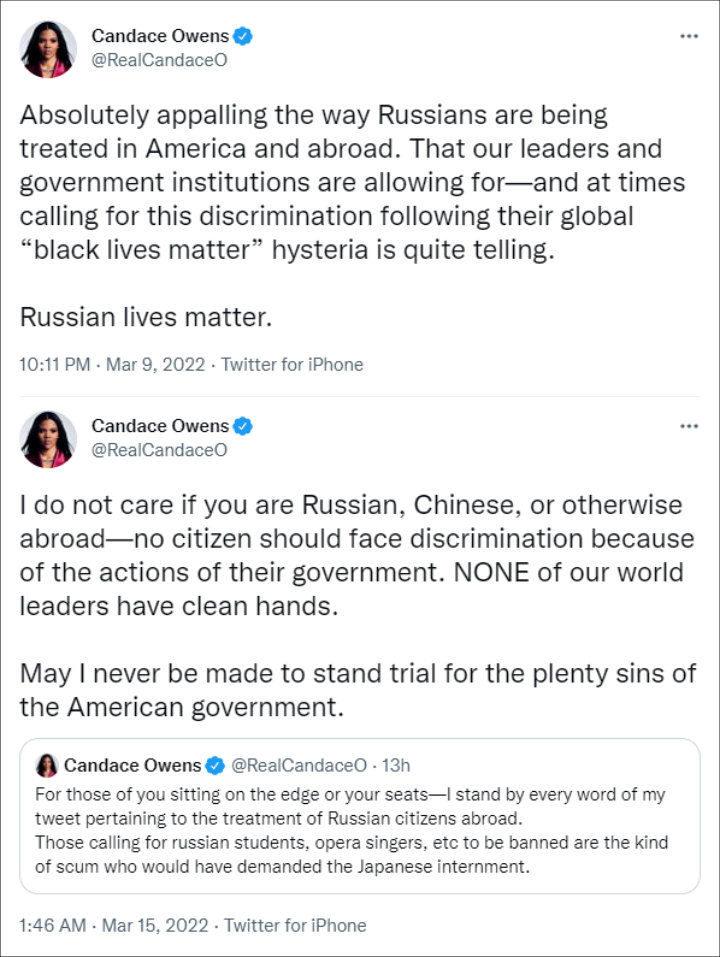 Back in February, Candace blamed the U.S. and NATO for Russian President Vladimir Putin's threat to invade Ukraine. "I suggest every American who wants to know what's *actually* going on in Russia and Ukraine, read this transcript of Putin's address," she wrote at the time.

She added, "As I've said for month- NATO (under direction from the United States) is violating previous agreements and expanding eastward. WE are at fault."