The co-host of the daytime talk show reveals that the show production 'will finish season 8 and wait for official word' after it's rumored that the show is set to be canceled due to its ratings.

AceShowbiz - Loni Love has broken her silence following rumors stating that "The Real" is set to be canceled after 8 seasons. Taking to her social media platform, the co-host of the talk show revealed that "no official decision" has been made.

The 50-year-old TV hostess made use of her Twitter account on Sunday, March 13 to address the matter. "It's been busy a few days but I got a call from the studio," she began. "No official decision has been made about #TheReal."

"I will be ok but please give grace to the 150 crew members. This may affect [them]," Loni continued. "We will finish Season 8 and wait for official word," wrote the season 1 contestant of "The Real Dirty Dancing". 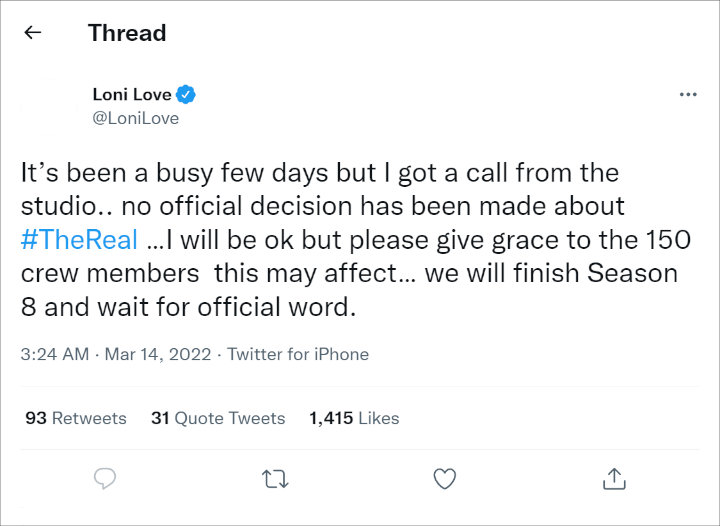 Loni Love confirmed that 'no official decision' has been made after it's reported that 'The Real' is set to be canceled.

Many fans of the daytime show were quick to respond to Loni's tweet. "Hoping 'The Real' DOES NOT get cancelled! I love 'The Real' and all the ladies! [Garcelle Beauvais] has been a great addition! I watch y'all every single day on Youtube since I dont watch cable TV. I watch the old clips all the time! 'The Real' is my favorite show ever," wrote one fan.

Earlier this month, The Jasmine Brand reported that "The Real" is set to be canceled. Though the reason for the cancellation remains unknown, the outlet claimed that it had something to do with the ratings of the show, which is currently co-hosted by Adrienne Bailon, Loni, Jeannie Mai as well as Garcelle.

The co-hosts previously included Tamera Mowry and Amanda Seales. The two, however, left the show in the summer of 2020. As for Amanda, she exited the show because it was allegedly "breaking [her] spirit."

The news of "The Real" cancellation came just days after Nick Cannon's self-titled show was axed five months following its premiere. Mort Marcus and Ira Bernstein, co-presidents of the show's producer-distributor, Lionsgate's Debmar-Mercury, said in a statement, "It's never easy to cancel a production with clear potential."

"But after a great deal of deliberation and examining various options, we have made the difficult business decision to end production on Nick Cannon," the message added. "We plan to offer viewers original episodes of the daytime talk show through the remainder of this season."