The Yeezy designer shares a new post of his estranged wife using all caps in the caption after admitting that leaking screenshots of his text messages with the reality TV star 'was jarring.'

AceShowbiz - Kanye West appears to taunt his critics after he's accused of "harassing" Kim Kardashian. The Atlanta native has shared another now-deleted post of the reality TV star after vowing to better his communication.

On Tuesday, February 15, the 44-year-old star updated his Instagram page with a photo of his estranged wife looking fierce in an all-black outfit while squatting. In the caption, Ye gushed over the SKIMS founder as writing, "VISION."

Having been criticized over his use of all caps that "makes people feel like I'm screaming at them," he then poked fun at the claim as adding, "OH SORRY ALL CAPS IS BACK FOR THE THE PEOPLE THATS ALL CAP." 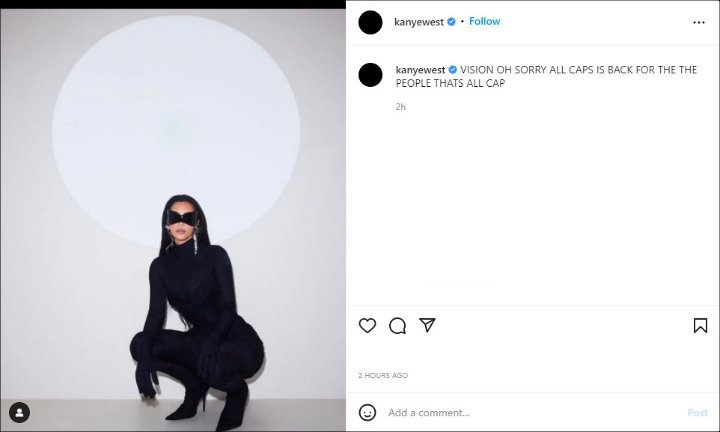 Several hours prior, Kanye wiped his Instagram page clean before sharing a new post in which he said that he takes "accountability" for his posts that stirred up the drama between him and Kim. "I've learned that using all caps makes people feel like I'm screaming at them. I'm working on my communication," he promised.

He went on acknowledging, "I can benefit from a team of creative professionals, organizers, mobilizers and community leaders. Thank everybody for supporting me. I know sharing screen shots was jarring and came off as harassing Kim. I take accountability. I'm still learning in real time. I don't have all the answers. To be good leader is to be a good listener."

Two hours later, however, Ye was back with another since-deleted post. He shared an image of a roadside billboard stating, "Stop telling fathers they should have fought harder to see their children & start asking mothers why he had to fight at all."

Ye previously aired his dirty laundry with Kim on social media. In his recent posts, he leaked his text messages with the mother of his kids in which she expressed her fear about her boyfriend Pete Davidson's safety.

Miguel and Nazanin Mandi Confirm They're Back Together With Loved-Up Photos: 'Proud of Us'