The actor portraying Rand Gauthier on 'Pam and Tommy' is clearly embarrassed after his 66-year-old mother Sandy Rogen makes a post about her sex life on her Twitter page.

AceShowbiz - Seth Rogen is not a fan of his mother's online habits and has no trouble in making it clear. After Sandy Rogen posted about having "great sex" on Twitter, the "An American Pickle" leading man told her to stop using the app with a hilarious remark.

On Thursday, February 3, Sandy tweeted, "You know how when you give blood you get a little badge that says, 'I gave blood today,' well there should be one that says 'I had great sex today.' Ha ha ha …" Embarrassed by the post, the "Knocked Up" star jokingly replied, "Burn this app to the ground."

Seth Rogen jokingly called out his mom Sandy for tweeting about her sex life.

This was not the first time Sandy made a tweet about sex. Back in 2019, the 66-year-old wrote on the blue-bird app, "Husband has a cold. Husband says kisses during sex don't have germs."

Some Twitter users later summoned the 39-year-old actor and comedian to check out his mom's saucy post. "Please get your mother @Sethrogen," one person in particular penned, while another echoed the sentiment, "@Sethrogen come get your moms."

Others, on the other hand, empathised with Sandy by urging her not to give in to her husband's advances so she wouldn't catch the illness herself. "Don't listen to him... Trust me.. I've got too many colds from my husband," one fan commented. "Husband is funny but tell him not to quit his day job," a different individual replied.

Back in 2017, Sandy shared another joke about her sex life. "Falling asleep after sex is like shavasana after yoga!" the Rogen family matriarch quipped at the time.

Catching wind of the tweet, the actor portraying Rand Gauthier on "Pam & Tommy" argued, "Jesus f**king Christ mom." His big sister Danya Rogen then chimed in by replying to his tweet, "Seriously. I actually gagged," along with the sick-face emoji. 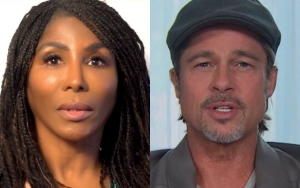