In addition to calling out his fellow Marvel star in a subtle way, the 'Shang-Chi and the Legend of the Ten Rings' star urges the media to 'stop highlighting opinions that are not rooted in facts or science.'

AceShowbiz - Simu Liu appeared to call out Evangeline Lilly for attending an anti-vaccination rally. Just hours after his fellow Marvel star posted in protest of vaccine mandates, the "Shang-Chi and the Legend of the Ten Rings" star took to social media to encourage people to get vaccinated.

"I lost my grandparents to COVID last year. They were still waiting for their vaccines," the 32-year-old actor tweeted on Thursday, January 27. He went on to reveal that he recently caught the deadly virus but the vaccine has helped him. "I'm fortunate to have been double-vaccinated and boosted when I got COVID 2 weeks ago. Felt like a cold."

Simu went on to say that the media "needs to stop spotlighting opinions that are not rooted in facts or science." In a following Twitter post, the "One True Loves" star noted, "As a @UNICEFCanada ambassador, I have seen the organization's efforts to deliver vaccines to underprivileged families around the world," adding that it's "a reminder of how lucky we are to be living in places where vaccine delivery and storage are not an issue." He then concluded his post, "Please, PLEASE appreciate that." 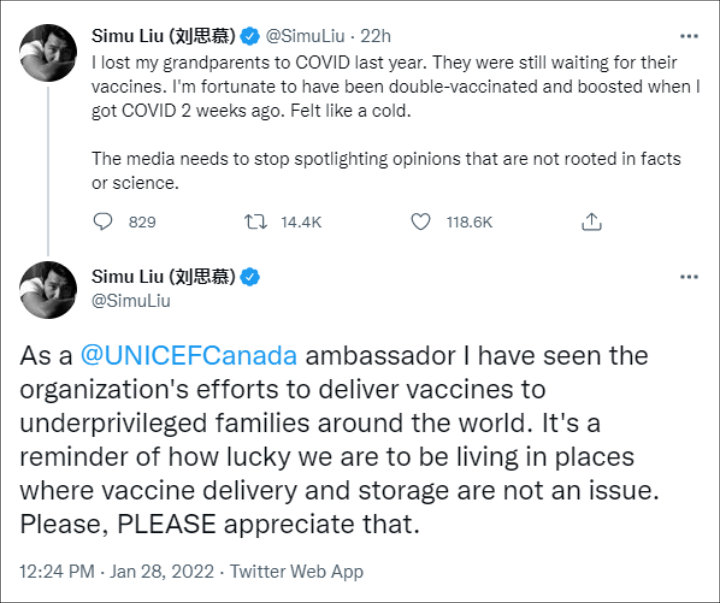 Simu Liu seemed to call out Evangeline Lilly after her anti-vax post.

Simu's social media post came just hours after Evangeline spoke out against vaccine mandates. The actress, who joined a protest in Washington D.C. this weekend, wrote in an Instagram post, "I believe nobody should ever be forced to inject their body with anything, against their will, under threat of: violent attack, arrest or detention without trial, loss of employment, homelessness, starvation, loss of education, alienation from loved ones, excommunication from society under any threat whatsoever."

"This is not the way. This is not safe. This is not healthy. This is not love. I understand the world is in fear, but I don't believe that answering fear with force will fix our problems," Evangeline, who portrays Hope van Dyne / Wasp in the Marvel Cinematic Universe, stressed. "I was pro choice before COVID and I am still pro choice today."

Evangeline's fans, however, claimed that the actress is not anti vaccine despite protesting vaccine mandates. "She's not anti-vax, she's anti-vax mandate. FYI she is vaccinated," one fan claimed. Another argued, "Evangeline is vaccinated she just doesn't think things should be forced." Someone else similarly said, "She's not against the vaccine. She's against mandates."

Simu Liu Slams Quentin Tarantino's Anti-Marvel Comments: You Don't Get to Point Your Nose at Me