Among those who witness her emotional baptism at the Crosspoint Church in Franklin, Tennessee are the former 'One Tree Hill' star's family and close friends as well as her new boyfriend Ian Schinelli.

AceShowbiz - Jana Kramer is celebrating a milestone in her faith. After getting baptized at the Crosspoint Church in Franklin, Tennessee, the former star of "One Tree Hill" posted a quote about "game changing strategy."

Making use of her Instagram Story on Sunday, January 23, the 38-year-old reality star/country singer posted a quote that read, "She walked with God." The quote further stated, "That was her game changing strategy."

Hours earlier, Jana shared a photo of her holding a board with a message that read, "I got baptized today!" while posing with her family, close friends as well as her new boyfriend Ian Schinelli. Over the snap, she wrote, "So beyond thankful for everyone in this photo."

In a separate Story, Jana added a snapshot that saw her hugging her friend and her spiritual coach Brandi Wilson. "Thank you @lovebrandiwilson for being there today. I love you and I'm so glad we get to be on this journey together," she captioned the post. 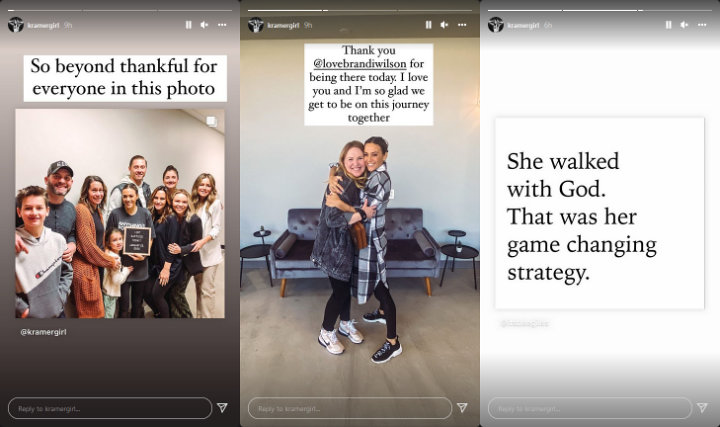 Jana Kramer shared wise words and photos after getting baptized.

Taking to her Instagram page, Jana uploaded an emotional video of her during the baptism process. One clip showed her being settled into a tub of water at the church. A few seconds later, she was dunked backward and reemerged with a big smile on her face.

"I don't have the words yet …I will…but for now…'In the name of Jesus there is healing,' " Jana captioned her post. The mom of two also added hashtags that read, "#faith" and "#baptism."

In a following post, Jana penned a lengthy message after getting baptized. "This is my battle cry," she began her message. "This is the day I stopped walking alone. The beauty is …I was never alone. He was always walking with me…I just didn't think I deserved that."

"If I'm honest I didn't know how to trust it or if I could trust it at all," Jana continued. She added, "Looking up to a 'father figure' with my past was hard to believe or have comfort in. I didn't think he would stay. That he wouldn't hurt me."

Jana went on to admit that she "pushed God away for years." She further shared, "But last year in the brokenness and quite moments alone, I realized I wasn't truly alone," adding that she realized "HE was there. That HE never left."

"God was just waiting for me to come to him. And I have…and today I made my faith public and it feels really good to know no matter what happens next on this journey of life, HE is next to me walking with me," Jana elaborated. She went on saying, "God is walking with you too through all the good and bad times, so let HIM in."

"I hope this encourages someone to take that next step because you aren't alone…," Jana stated. The country singer, who finalized her divorce from Mike Caussin last July, added, "In the name of Jesus there is healing," before concluding her message by quoting a bible verse, "The faithful love of the Lord never ends! His mercies never cease. Great is his faithfulness, his mercies begin afresh each morning. Lamentations 3:22-23."