The 'Transformers' beauty, who often shows off PDA with her fiance, posts a video that sees the soon-to-be-married couple lying side-by-side in a full bath that's infused by rose petals.

AceShowbiz - Megan Fox has given a look at an intimate moment with Machine Gun Kelly on her social media platform. The "Transformers" actress shared a clip of their romantic bath time just days after their engagement.

The 35-year-old actress, who often flaunts PDA snaps with her fiance, took to her Instagram Story on Monday, January 17 to post the video that saw the soon-to-be-married couple lying side-by-side in their full bath which was infused by rose petals. She also showed off their matching metallic gold pedicures while enjoying romantic time together. The pair could be heard laughing as the "Bad Things" rapper asked, "What the f**k is happening?" 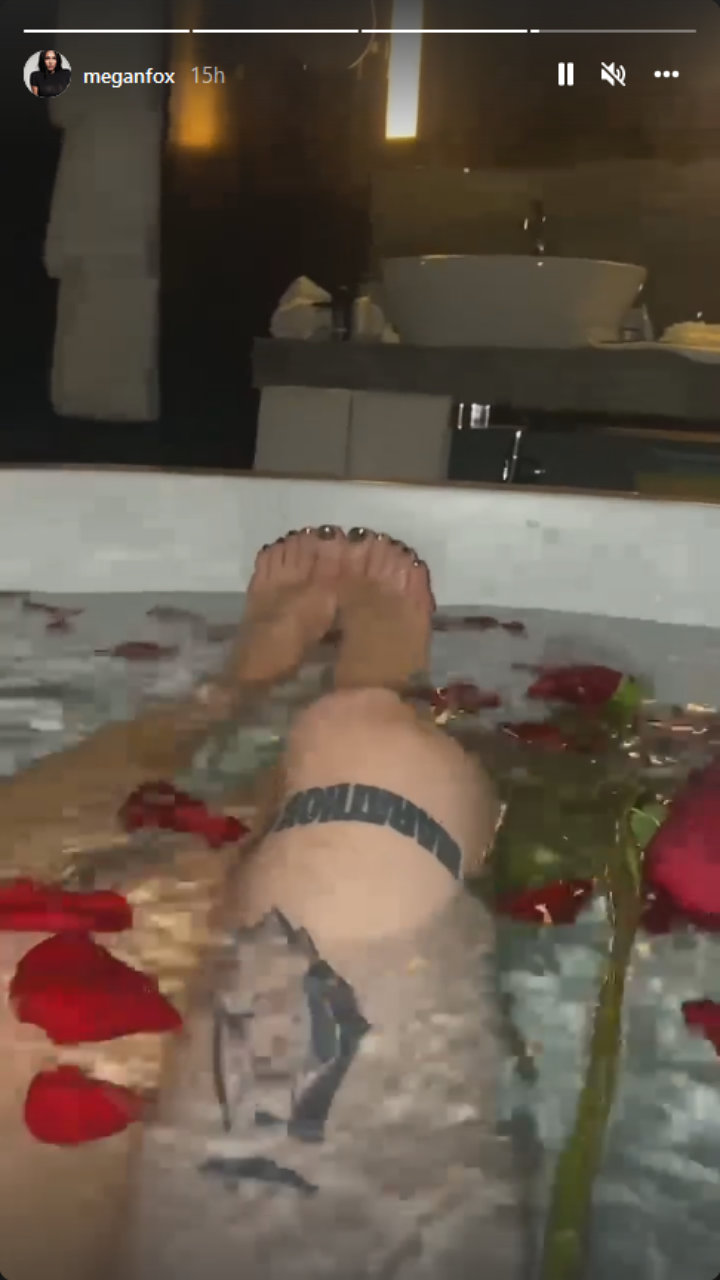 Megan Fox shared a clip of her and Machine Gun Kelly enjoying intimate bath time together.

A few hours earlier, Megan uploaded a series of snapshots from Dolce & Gabbana fashion show. For the event, the "Jennifer's Body" star flaunted her stunning figure in a see-through black over a crop-top emblazoned with the word "sex."

In the meantime, MGK donned an emblazoned black suit that featured crystals, eyelets and grommets. The 31-year-old musician added gloves that matched the glittery flair of the suit, two distinct rings hanging from his lips as well as silver earrings.

Megan and MGK got engaged on January 11. When announcing the exciting news of their new relationship milestone, Megan posted a sweet video of the romantic proposal which took place under the banyan tree in Puerto Rico that holds a significant meaning in their relationship.

"In July of 2020 we sat under this banyan tree. We asked for magic... We were oblivious to the pain we would face together in such a short, frenetic period of time," Megan captioned her post. "Unaware of the work and sacrifices the relationship would require from us but intoxicated off of the love. And the karma."

Megan went on to say, "Somehow a year and a half later, having walked through hell together, and having laughed more than I ever imagined possible, he asked me to marry him." She gushed, "And just as in every lifetime before this one, and as in every lifetime that will follow it, I said yes," before concluding her post, "and then we drank each other's blood."

Taking to his own Instagram page, MGK, born Colson Baker, gave a close-up look at his soon-to-be wife's personalized engagement ring, featuring both diamond and emerald stone. He captioned the clip, "Yes, in this life and every life." The "Till I Die" rapper also revealed that the combination of their birthstones symbolized "two halves of the same soul forming the obscure heart that is our love."