Both Arlis, who was 34 when he died, and Viall vied for Kaitlyn Bristowe's heart in season 11 of the long-running ABC dating competition show which aired back in 2015.

AceShowbiz - Bachelor Nation is mourning the death of former "The Bachelorette" contestant Clint Arlis. The architectural engineer's passing was announced on Thursday, January 13 on Twitter. He was 34.

Sharing the devastating news was his high school wrestling coach Scott Bayer of Batavia, Illinois. Through his Twitter account, Bayer shared some memories of the Batavia High School alum before touching on his professional wrestling career.

"It is with a heavy heart and a sense of profound loss that we announce the death of one of the Batavia Wrestling Program's All-Time greats, 2005 graduate, Clint Arlis," Bayer wrote. "Clint was the beloved son of Coach Tom Arlis and his wife, Jamie, protective, loving older brother of his sister, Taylor, and the boyhood idol and best friend of his kid brother, Coach Logan Arlis."

He went on to gush over Arlis, saying, "Clint was the beloved son of Coach Tom Arlis and his wife, Jamie, protective, loving older brother of his sister, Taylor, and the boyhood idol and best friend of his kid brother, Coach Logan Arlis." He added, "I have come to know Clint over the years since I joined Tom's coaching staff and the Batavia Wrestling Family in the late fall of 2005, after his graduation. I have found him to be extraordinarily devoted to his family and deeply committed to the sport wrestling at a level few of us have ever reach in our careers."

"While attending the University of Illinois, he spent the majority of his college years as the workout partner to 2x Big-Ten Champion, 3x All-American and current U of I Head Wrestling Coach, Michael Poeta," Bayer continued. "During his senior year, Clint gritted his way into the starting lineup at 157 lbs, notched a respectable 14-7 record and placed 7th in the Big-Ten Tournament. While pursuing his career in architecture, he's always made a priority of coming back to our (his) wrestling room and generously giving back to our kids. He was an talented artist with a sharp wit, a sardonic sense of humor and palpable authenticity."

Bayer also recalled "the heartfelt speech [Arlis] dedicated to his dad at his retirement celebration" which "made me proud to know both of them." He added, "His legacies as a fierce competitor, tireless worker, a caring influence to younger Batavia wrestlers, a devoted friend and a loving son and brother will resonate far beyond his days in our presence."

Concluding his lengthy post, Bayer wrote, "On behalf of all of us in the Batavia Wrestling Family, we send our deepest and most sincere condolences to the Arlis Family during this period unimaginable heartbreak and grief. To the Arlis Family, we loved Clint. We love you."

Also paying tribute to Arlis was fellow "Bachelorette" alum Nick Viall. On his page, the former star of "The Bachelor" tweeted, "Just heard about the passing of Clint Arlis. I got a chance to get know Clint a little after our time on Kaitlyns season and I always enjoy are time and conversations. A very kind, unique, and talented person who was taken from this world far too soon. RIP Clint [heart emoji]." 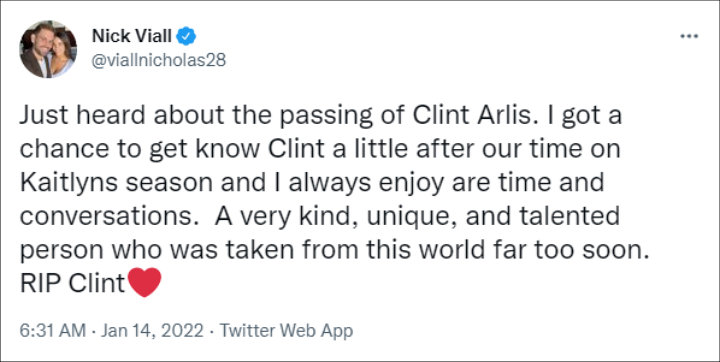 Both Arlis and Viall vied for Kaitlyn Bristowe's heart in season 11 of "The Bachelorette" in 2015. Arlis, who was eliminated during week three, sparked controversy with his friendship with JJ Lane at the time as they were labeled as villains. He apologized later in "The Men Tell All", which also saw him declaring that he's a "straight man" amid bromance rumors.