The '21st Century Girl' songstress is pictured sharing a smooch with the musical artist after a nurse is seen grabbing a quick swab of her mouth, probably for COVID-19.

AceShowbiz - Willow Smith is making her health a priority during a romantic getaway. The actress/singer was photographed taking a COVID-19 test while enjoying a tropical vacation with her alleged boyfriend.

On Friday, December 3, the 21-year-old was pictured on the beach in Miami with someone who looks like DE'WAYNE, whom she's recently been touring with across the U.S. In some snaps obtained by TMZ, a nurse was seen grabbing a quick swab of her mouth, probably for COVID-19, as she sat on a lounge chair with her denim jacket on.

Once the test was completed, making sure that she and everyone around her were not infected with the virus, Willow was on full vacation mode. She stripped down to her black two-piece bikini with a semi-sheer bottom and shared a smooch with DE'WAYNE, who went shirtless with just a pair of black swimming trunks on. 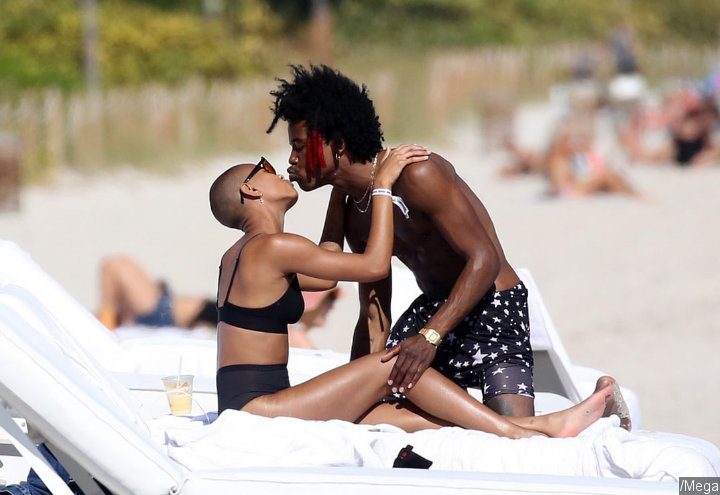 Willow Smith and DE'WAYNE packed on the PDA on a Miami beach.
See also...

Willow, who accessorized with black sunglasses, was later seen seducing her man by lying on top of him. She later touched his bare chest, possibly to help rub some sunscreen lotion as he also helped put lotion on her back.

The two were then seen getting up from their chairs and standing closer to the seashore. DE'WAYNE was spotted putting his hand on her back as they enjoyed the view.

They later left together after their cuddle session. Looking smitten to each other, they were smiling as they walked side-by-side. Willow put on a black robe and jeans over her bathing suit, while DE'WAYNE wore a denim jacket, which was earlier donned by Willow, on top of his black pants.

Both of them matched each other's style with black boots. The "Whip My Hair" hitmaker was seen holding a glass of drink in one hand, while the alternative singer/rapper from Houston got his hands full with their belongings.

It's unclear when Willow and DE'WAYNE have started dating or if they're relationship is exclusive.