While strolling through downtown Manhattan, the '13 Going on 30' actress and the CEO and Chairman of Cali Group are seen enjoying each other's company while holding their coffees.

AceShowbiz - Jennifer Garner apparently has been less shy about stepping out with John Miller. In a recent sighting, the "Peppermint" actress was spotted enjoying a morning coffee date with her ex-boyfriend in New York City.

On Wednesday, September 29, the 49-year-old actress was caught strolling through downtown Manhattan with the CEO and Chairman of Cali Group. In photos surfacing online, the "13 Going On 30" star and her rumored boyfriend could be seen holding their coffees.

For the casual stroll, Jennifer, who appeared to be makeup-free, wore a black jacket over a gray T-shirt. To complete her sporty look, she added jogging pants, a blue tennis cap, sunglasses and trendy Veja sneakers. In the meantime, John sported a gray Puma T-shirt with dark slacks and brown lace-up shoes.

Prior to their Wednesday sighting, Jennifer and John were also spotted together in mid-August. At the time, the "Miracles From Heaven" actress was pictured with her ex-partner outside an apartment building in New York City. The two didn't show any PDA as the actress walked a few steps ahead of her rumored boyfriend while they seemingly headed into an entrance.

In the images, Jennifer kept it casual in a white sweater, jeans and sandals. The "Yes Day" actress also wore a pair of black-rimmed glasses and a face mask for protection, while her long brunette hair was let loose. As for John, he donned black jeans and a flannel shirt.

Earlier this year, the pair reportedly gave their romance another try. "Jen and John are back on," a source claimed back in April. The so-called inside source went on to spill, "It started up a few weeks ago."

"They're determined to make it work," the insider added, noting the two "had remained friendly since their breakup." On why they got back together, the source noted that the couple "eventually realized there was a spark between them" and decided to give their relationship another shot. 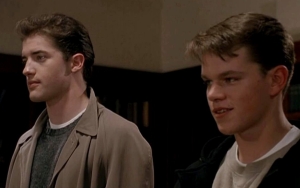