In addition to making an appearance at the grand opening of his new restaurant in Detroit, the 'Rap God' hitmaker serves ten first customers at joint's walk-up window.

AceShowbiz - Eminem is surprising his fans at the grand opening of his new restaurant, Mom's Spaghetti. While making an appearance at the joint's walk-up window, the "Rap God" hitmaker greeted the customers with a middle finger.

On Wednesday, September 29, the Grammy-winning rapper was spotted at the drive-thru in his new eatery. Not only making an appearance during the opening day, he personally served food to the first ten customers.

For the big day, fans took to their social media platform to share videos and photos. The pictures saw Eminem in his signature hoodie look, handing out some grub as well as posing for a few photos with stans. In one snap, the "Venom" rapper could be seen flashing his middle finger while greeting a fan. 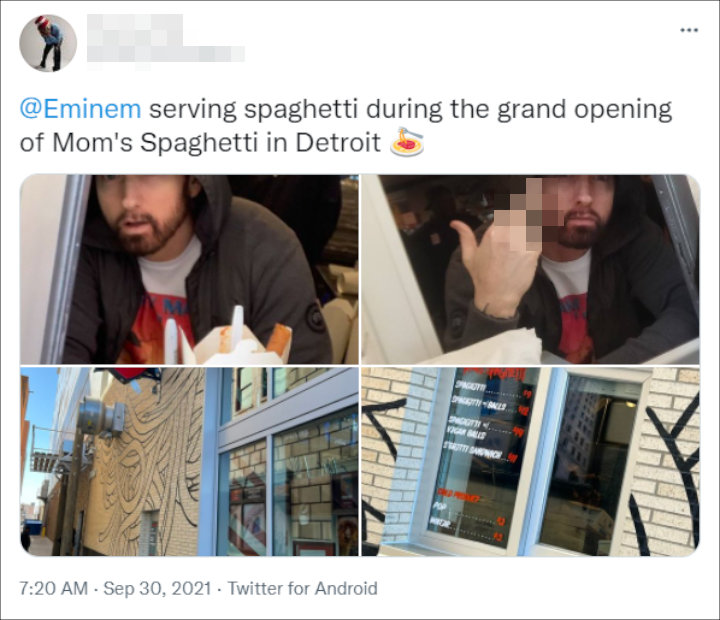 According to a the Detroit Free Press, the line for Mom's Spaghetti extended multiple blocks. It's also reported that some patrons had been camping out at the site since early Wednesday, hours before the joint's official opening at 5 P.M. local time.

Mom's Spaghetti was announced last week in a commercial that aired on local TV stations. The spot advertised the eatery's signature food items, including the s'ghetti sandwich and a serving of spaghetti with or without meatballs. The concept was inspired by Eminem's 2002 hit "Lose Yourself," in which he raps about puking up his mom's spaghetti.

"We've had a lot of fun putting this project together with the folks at Union Joints, and the response from fans has been overwhelmingly positive," Eminem's manager, Paul Rosenberg, said in a press release. "The previous pop-ups were really a test for us to determine whether there was enthusiasm for a regularly-occurring Mom's Spaghetti spot that would be open all year long."

Paul continued, "We are really pleased to announce the arrival of the walk-up restaurant and adjacent upstairs store, called The Trailer." Explaining further about The Trailer, Paul added, "Fans can experience a uniquely-curated environment and obtain merch and other items from Eminem and his new pasta operation."

'The Masked Singer' Recap: The Dalmatian Is Revealed to Be a Rapper and KarJenner Ex