AceShowbiz - Is Kourtney Kardashian throwing shade at her ex Scott Disick? After Younes Bendjima, another ex of Kourtney's, exposed Scott's DM in which the latter trash-talked the reality TV star and her current boyfriend Travis Barker, Kourtney shared a cryptic message which made people think was directed to Scott.

On Wednesday, September 1, the "Keeping Up with the Kardashians" alum took to her Instagram Stories to share a picture of a comic featuring a couple kissing. "Relax... This is going to hurt forever," the woman in the picture said.

It was Kourtney's caption that raised people's eyebrow. "HOW TO GET OVER SOMEONE who treated you BADLY," so she wrote over the image. 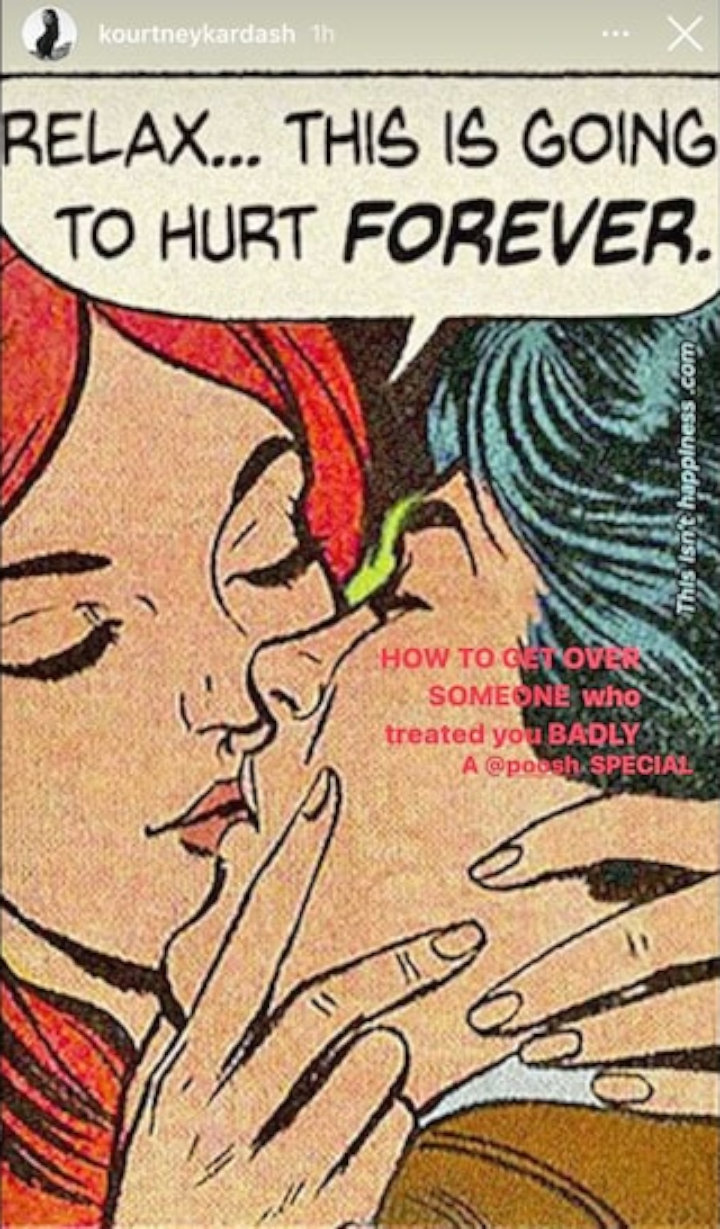 In related news, Kourtney reportedly planned to "confront" Scott over his reaction to her PDA-packed photos with Travis. "She was surprised, but not shocked," a source told PEOPLE. "Scott has always had a difficult time accepting that Kourtney is happy with someone else. He is especially threatened by her relationship with Travis."

The informant claimed that Kourtney and Scott's three kids, Mason, Reign and Penelope, love the Blink-182 drummer "which has been hard" for the "Flip It Like Disick" star, though "he and Kourtney have been getting along." The insider added, "Kourtney is disappointed that he engages in drama when they have been doing well co-parenting. She doesn't get why he felt the need to reach out to Younes. She will confront him about it. For now, she continues to enjoy her trip with Travis."

Younes previously called out Scott for trash-talking Kourtney and Travis' hot romance. In a screenshot shared by the former boxer on his Story on Monday night, August 30, Scott wrote to him, "Yo is this chick ok!???? Broooo like what is this. In the middle of Italy," alongside a picture of Kourtney and Travis making out on a boat during their vacation in Italy.

Seemingly not amused by Scott's shade toward Kourtney, Younes told Scott, "Doesn't matter to me as long as shes happy." He also added, "PS: I aint your bro." In the caption, meanwhile, Younes wrote, "keep the same energy you had about me publicly, privately."

In response to the ordeal, Kourtney appeared took the high road as she chose to share a Bible verse on Twitter. "John 15:7," she cited. "If you remain in me and my words remain in you, you may ask anything you wish, and it will be done for you."