The comedian is under fire following her appearance in a new episode of 'Wild 'N Out' in which she impersonates the 'I Have Nothing' singer during a segment titled 'Outgoing Message'.

AceShowbiz - Jessie Woo faced backlash following her appearance in a new episode of "Wild 'N Out". In the said outing, the comedian impersonated Whitney Houston but some people weren't impressed by her tasteless joke about the icon's death.

The episode saw her participating in the "Outgoing Message" portion of the show. When she was tasked to impersonate the "I Have Nothing" hitmaker, Jessie sang, "You have reached my line but unfortunately I do not have the time," while imitating Houston's vocal runs. "And I... I'm dead," she said before walking off the stage. The audience, however, was stunned over the insensitive joke with anyone hardly laughing at the joke.

The backlash was almost immediate. "Don't play with Whitney hunnie!" one person commented on Instagram. "She's so cringe sometime," another person said. Meanwhile, a user claimed, "Now this a lil too far babes..."

However, some others jumped into Jessie's defense by comparing to people's reactions to jokes related to Michael Jackson. "... when people joke about MJ? Keep that same energy," a user said. Another person found it funny, commenting, "No but I have dark humor."

Jessie herself caught wind of the criticism and took to Twitter to defend herself. "Male Comedians and folks on twitter make jokes about Whitney's battle with drugs still till this day... but me impersonating her during a voicemail game by singing her song & saying 'I'm dead' (a great excuse why she cannot come to the phone)... but I went too far?" she questioned in a post on Friday, August 13. 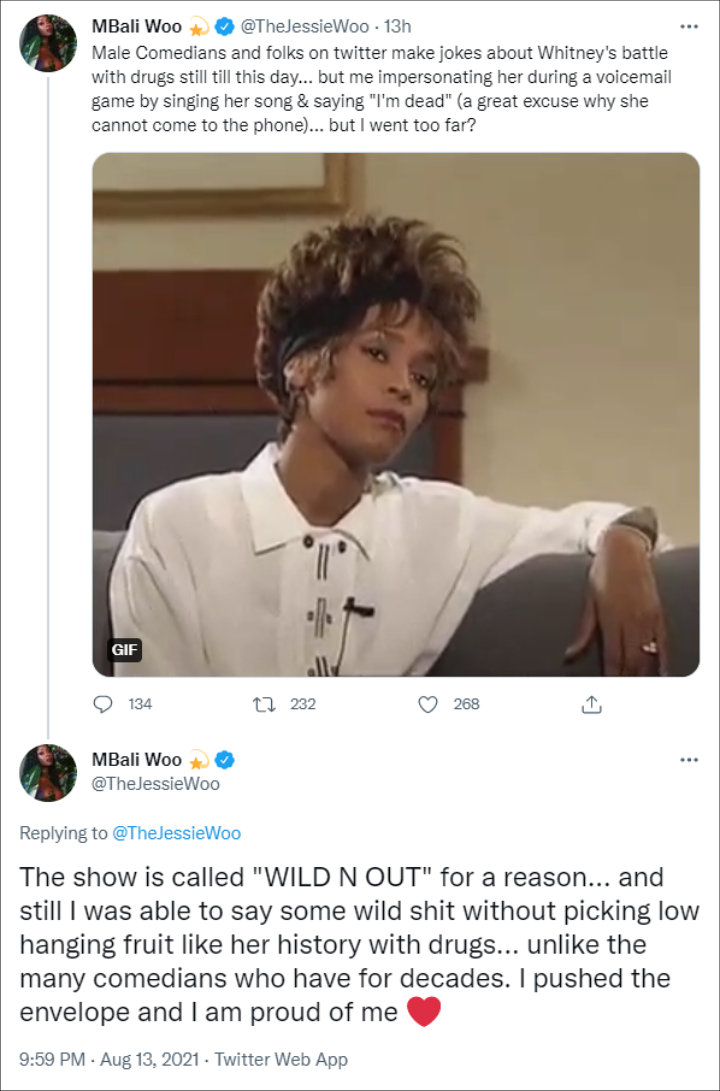 "The show is called 'WILD N OUT' for a reason... and still I was able to say some wild shit without picking low hanging fruit like her history with drugs... unlike the many comedians who have for decades," she added. "I pushed the envelope and I am proud of me."

T.I. Wants to Have a Sit-Down With Leslie Jordan Following Homophobic Accusations

'LHH: Miami' Star Jessie Woo Is Said to Be Sleeping With Producers