Finding it 'sad' that the show makes fun of organ transplants, the 'A Rainy Day in New York' star also makes use of the opportunity to encourage her fans to sign up to be an organ donor.

AceShowbiz - Selena Gomez has responded to a controversial joke about her kidney transplant on "The Good Fight". Finding it "sad" that the show made fun of organ transplants, the actress/singer has called out the show's writer for writing such "tasteless" lines.

The 29-year-old took to her Twitter account on Tuesday, August 3 to weigh in on the joke. "I am not sure how writing jokes about organ transplants for television shows has become a thing but sadly it has apparently," so she posted.

Sharing her hope that this will be the last time such jokes made it on air, she added, "I hope in the next writer's room when one of these tasteless jokes are presented it's called out immediately and doesn't make it on air." 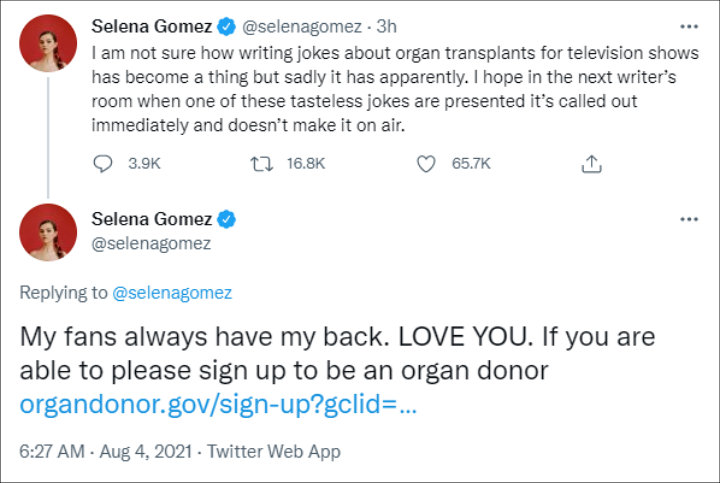 Selena Gomez ripped 'The Good Fight' for making joke about her kidney transplant.

In episode 4 of "The Good Fight" season 5, Nyambi Nyambi's character Jay says it seems like people "need a permission slip to tell a joke." When he asks which jokes are off-limits, Ifadansi Rashad's Jim mentions "Selena Gomez's kidney transplant" among other taboo topics such as necrophilia and autism.

Selena's fans soon came to her defense, posting on social media with a #RespectSelenaGomez hashtag that became trending. "This woman deserves all the love and happiness, it's so sad how people use a hurtful moment for her just for nasty jokes, put some respect on her name (sic)," tweeted one fan.

Another noted, "The kidney transplant was a life threatening situation and i don't understand how it could ever cross someone's mind to make fun of it (sic)."

Selena underwent a kidney transplant in 2017 as part of her battle with lupus. At the time, her friend and actress Francia Raisa became a donor.

Jennifer Aniston Reacts to Her Viral Look-A-Like TikTok Video: 'It Freaked Me Out'