Bandmates Billy Gibbons and Frank Beard confirm that the bassist died at his home in Houston, Texas, and rocker Jeff Scott Soto is among the first to pay tribute.

AceShowbiz - ZZ Top star Dusty Hill has died, days after a hip issue forced the bassist to pull out of a gig in Illinois. The 72-year-old passed away in his sleep at home in Houston, Texas on Wednesday, July 28.

His bandmates, Billy Gibbons and Frank Beard, have confirmed the sad news. "We are saddened by the news today that our Compadre, Dusty Hill, has passed away in his sleep at home in Houston, TX," an Instagram statement from the pair reads.

"We, along with legions of ZZ Top fans around the world, will miss your steadfast presence, your good nature and enduring commitment to providing that monumental bottom to the 'Top'. We will forever be connected to that 'Blues Shuffle in C'. You will be greatly missed, amigo."

It is not yet clear if Hill's death is linked to his recent hip injury.

The Rock & Roll Hall of Fame inductee, real name Joseph Hill, was ZZ Top's bassist for more than 50 years. Born in Dallas, Texas in 1949, he met future bandmates Gibbons and Beard, while touring the Texas club circuit with his brother's band.

Hill and Beard formed a band in the late 1960s and moved to Houston, where they eventually joined Gibbons' ZZ Top.

The trio celebrated its 50th anniversary at a San Antonio, Texas concert in February, 2020.

The band was inducted into the Rock and Roll Hall of Fame in 2004.

Hill had suffered a number of health scares in recent years - in 2000, ZZ Top canceled a European tour after he was diagnosed with Hepatitis C.

On Friday, Beard and Gibbons played their first ZZ Top show without Dusty, revealing he was on "a short detour back to Texas, to address a hip issue." 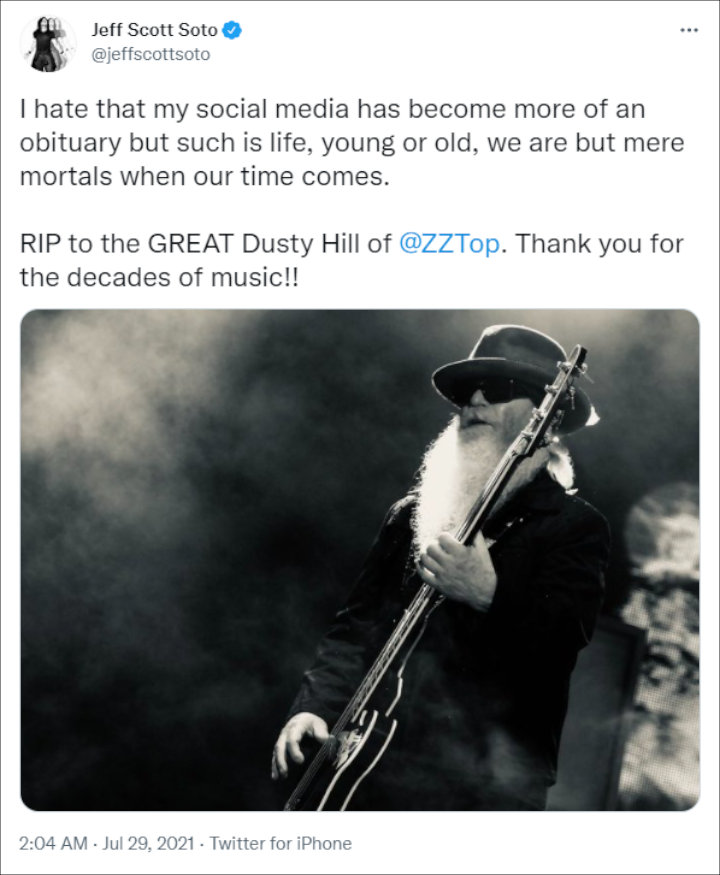 Rocker Jeff Scott Soto was one of the first to pay tribute to Hill on Wednesday, tweeting, "I hate that my social media has become more of an obituary but such is life, young or old, we are but mere mortals when our time comes. RIP to the GREAT Dusty Hill of @ZZTop. Thank you for the decades of music!!"