The Mera depicter in 'Aquaman' is pictured taking her 3-month-old baby girl in a stroller while heading out to pick up a takeaway coffee in Hampstead, London.

AceShowbiz - Amber Heard is including her little one in her daily activities. Several months after quietly welcoming her first child via surrogate, the new mom has been spotted in an outing with her daughter for the first time.

The 35-year-old stepped out in the affluent village of Hampstead, London on Wednesday. July 14 with her little bundle of joy by her side. She was seen enjoying a relaxing stroll while taking her baby girl in a stroller. 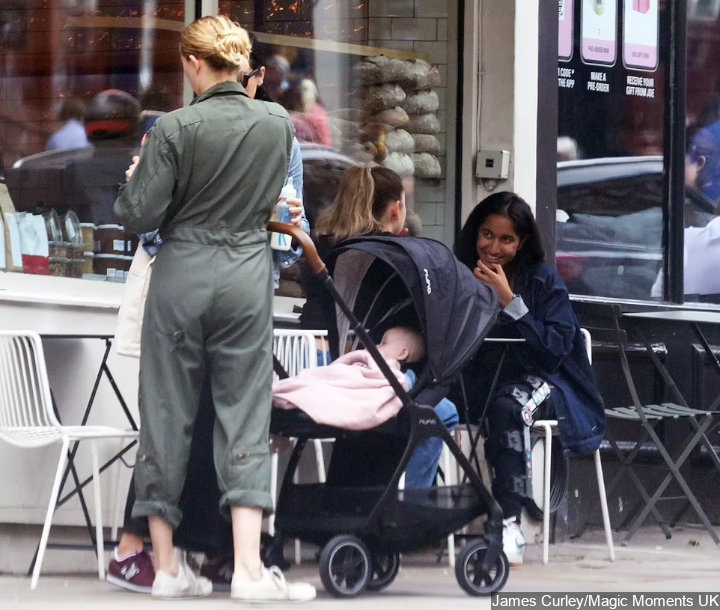 In pictures obtained by Daily Mail, the "Magic Mike XXL" star stopped by a cafe to pick up her takeaway coffee. While waiting for her order, the actress was seen engaging in a conversation with a female companion, possibly a nanny, as the other woman was seen helping Amber carry the baby's stuff, including a milk bottle.

For the outing, Amber was casually chic in a khaki boilersuit that she teamed with plain white trainers. Her long blonde hair was pulled up into a bun as she donned minimal makeup. As for her baby daughter, she was wrapped up in a pink blanket.

Amber welcomed her first child on April 8, but only announced the news on July 1. Alongside a photo of herself cradling the infant on her chest, the new mum wrote, "I'm so excited to share this news with you. Four years ago, I decided I wanted to have a child. I wanted to do it on my own terms."

"I now appreciate how radical it is for us as women to think about one of the most fundamental parts of our destinies in this way," she continued. "I hope we arrive at a point in which it's normalized to not want a ring in order to have a crib."

"A part of me wants to uphold that my private life is none of anyone's business. I also get that the nature of my job compels me to take control of this," she added, before unveiling her daughter's birth date and name, which is a tribute to her late mother Paige. "My daughter was born on April 8, 2021. Her name is Oonagh Paige Heard. She's the beginning of the rest of my life," she concluded the caption of her post.

She has since documented her time with her daughter on social media. Last week, she posted a video of her drinking green juice while holding her baby girl on the kitchen counter.