Being deemed 'too skinny' by online critics, the 'Once Upon a Time in Hollywood' actress explains that she 'looked smaller' than she does in real life because of camera's 'weird angle'.

AceShowbiz - Rumer Willis is not letting negative comments about her figure slide. Finding herself deemed "too skinny" because of new photos she shared, the "Once Upon a Time in Hollywood" actress took to social media to advise trolls who "extremely body shaming" her to have "a private conversation" with her.

On Wednesday, June 30, the 32-year-old actress called out haters in a lengthy note she posted on Instagram Story. "I know I don't need to do this but in an effort to spread some awareness and shed some light on body shaming tactics I felt the need to share," she wrote. "If you were actually concerned for my health and welfare or anyone you think may be actually struggling send them a dm and have a private conversation." 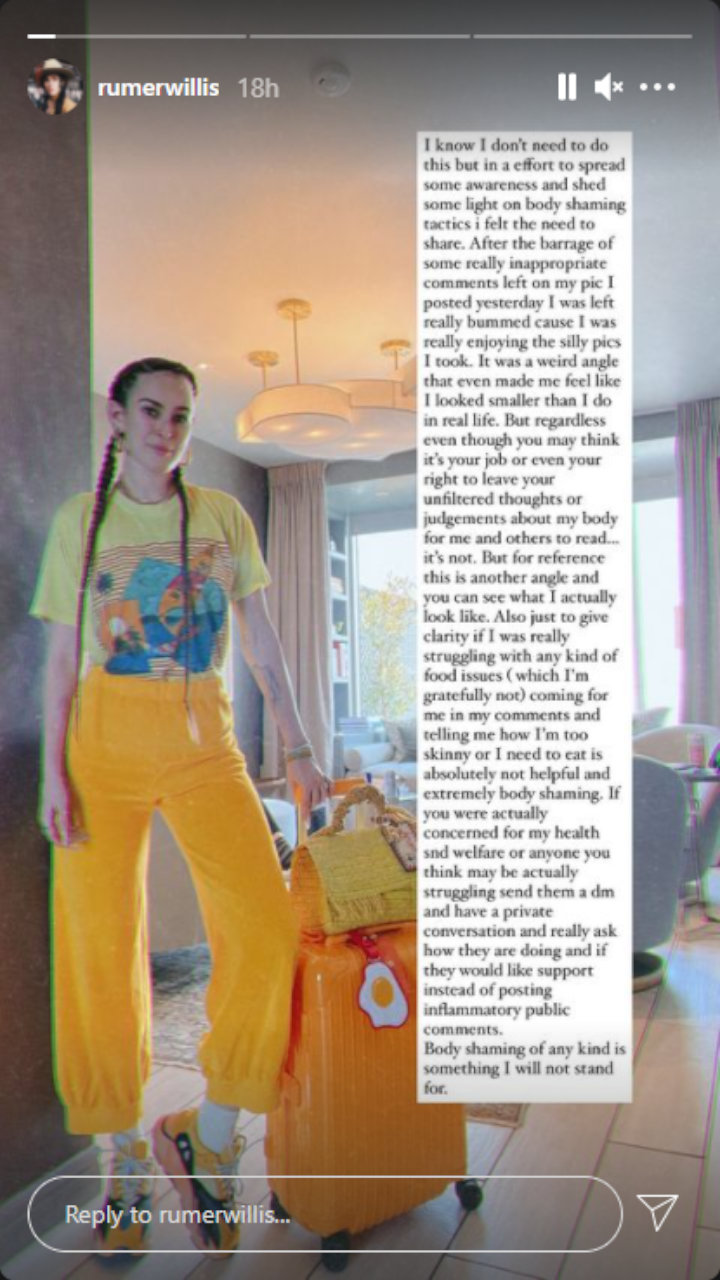 Elsewhere in the post, the daughter of Demi Moore and Bruce Willis stressed that the critics should "really ask how they are doing and if they would like support instead of posting inflammatory public comments." She declared, "Body shaming of any kind is something I will not stand for."

In her message, "The House Bunny" actress claimed the "barrage of some really inappropriate comments" left on her photos posted on Tuesday, June 29, left her "really bummed." On the reason why, she stated that she "was really enjoying the silly pics" she took.

The older sister of Tallulah Willis also explained why she looked "too skinny." She stated, "It was a weird angle that even made me feel like I looked smaller than I do in real life." Shutting down the critics, she reminded, "Even though you may think it's your job or even your right to leave your unfiltered thoughts or judgements about my body for me and others to read…it's not," she pointed out.

Rumer went on to point out that posting harsh comments on someone's Instagram account is not a good way to confront others about their eating habits. "If I was really struggling with any kind of food issues (which I'm gratefully not) coming for me in my comments and telling me how I'm too skinny or I need to eat is absolutely not helpful and extremely body shaming," she explained. 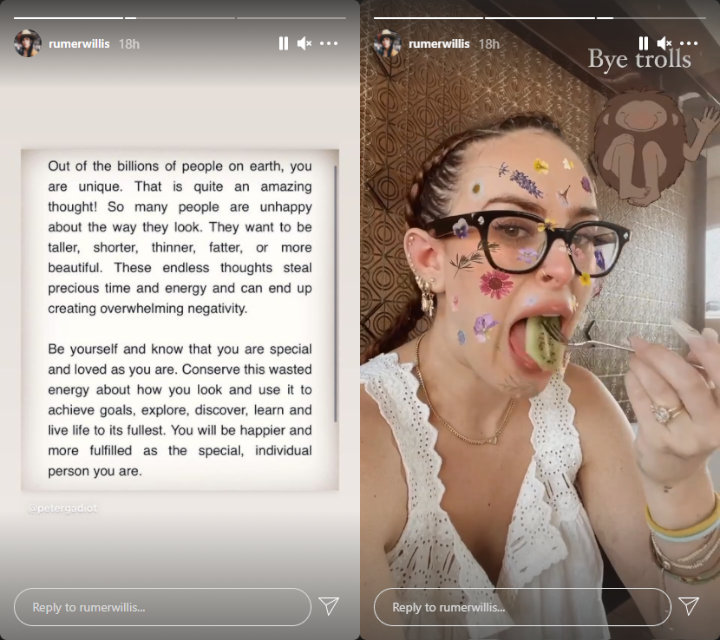 Rumer Willis continued to fired back at online trolls.

In a following Story, Rumer posted a quote about embracing "unique" look, which was first uploaded by actor Peter Gadiot. The post read, "Out of the billions of people on earth, you are unique. Be yourself and know that you are special and loved as you are." In the next post, "The Escort" actress came up with a video of herself eating kiwi with the caption, "Bye trolls."

Rumer Willis Blasts Anti-Maskers After Being Exposed to Covid-19